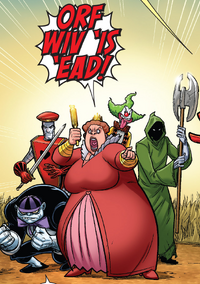 Origin
Created out of the surrounding landscape by the insane, reality warping mutant, Mad Jim Jaspers, to keep him company, the Crazy Gang survived his destruction and went on to become some of Britain's most inept criminals, often used as pawns by others.

When the reality-warping Jim Jaspers decided that he needed friends, he used his powers to create the Crazy Gang (just as his counterpart from Earth-238 had created the original Crazy Gang). After giving the Crazy Gang life, Jaspers was murdered by the Fury, a creation of his late Earth-238 counterpart. The Crazy Gang survived the Fury and wandered off. They went on to become Britain's most inept supervillains. They subsequently placed an advertisement in a newspaper in order to find a new leader and, as a result, the Crazy Gang entered the employ of Slaymaster. Under his leadership, the gang committed a series of audacious crimes, robbing the Royal Mint, the National Gallery, and the British Museum. As Slaymaster had planned, these crimes attracted the attention of Captain Britain, who he captured. Having no further use for the Crazy Gang, Slaymaster dismissed them.

After Deadpool, and the Mercs for Money stole a Rigellian Recorder, they were attacked by the Crazy Gang who tried to steal the Recorder from them, the Mercs were able to fight them off, and escaped.[3] The Crazy Gang eventually found Deadpool again at the Ozarks Kingpin HQ, who had won the Recorder at an auction conducted by the Mercs. They got into a fight with the Mercs, and Ozarks Kingpin henchmen, after Deadpool shot Tweedledope, and apparently killing him, the Crazy Gang retreated from the fight.[4]

In Britain, The Crazy Gang were a 1930's group of comedians, appearing in film and on stage.

Retrieved from "https://marvel.fandom.com/wiki/Crazy_Gang_(Earth-616)?oldid=5694769"
Community content is available under CC-BY-SA unless otherwise noted.