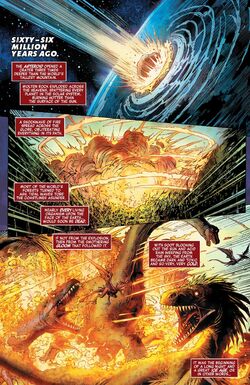 The Cretaceous–Paleogene Extinction Event, also known as the Cretaceous–Tertiary Extinction, was a sudden mass extinction of some three-quarters of the plant and animal species on Earth, approximately 66 million years ago. It was caused by an asteroid that was drawn from space by the planet itself, as a mean to crack open the Superflow, in order to initiate its first White Event on Earth. The Starbrand housed in the asteroid created a new Starbrand from a dinosaur.[1]

As a result of this event, the larger dinosaur species were wiped out. The small mammals having escaped the chaos could evolve and take new forms. This allowed the human race the opportunity to evolve.[2][3] Many dinosaurs were taken by the Nuwali to a sanctuary on the southern continent know as the Savage Land.[4]

Earth-9997's past suggests that the dinosaurs were wiped out when the Celestials carved out a portion of the Moon to serve as orbiting observatory for the Watcher.[5]