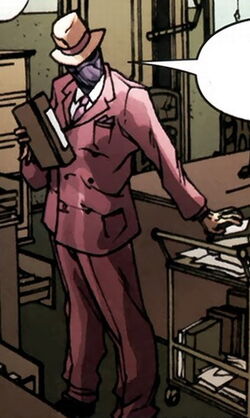 The man known as the Crime Master was affiliated with the Ku Klux Klan and the Friends of New Germany, which the chairman, Josef Ansell of the later organization made him the masked villain to undermine criminal society in New York City in secretly abducting African-Americans to be experimented in Dr. Otto Octavius' experiments. Crime Master was known for his violent and ruthless reputation against anyone who are against him, in which he even personally knife his victims.

Crime Master's actions was investigated from interferences from Spider-Man and was criticized from his superior for almost exposing Octavius' secrets and its connection to the Friends of New Germany. After escaping from the authorities after his henchman, Sandman beat up Spider-Man and killed by Jean De Wolfe and his men, Crime Master visited his lover Felicia Hardy and discovered that she solicited with Spider-Man. In retaliation, Crime Master beat Felicia and severely cut her with a broken mirror glass. Inevitably, Crime Master, as per instruction from Ansell, forced Octavius to close down his experiments and killing the prisoners. Fortunately, Spider-Man freed the prisoners and fought off the Crime Master's men. Crime Master desperately hold Robbie Robertson hostage just as federal authorities stormed Octavius' hideout in Ellis Island. Crime Master was then mercilessly vivisected and killed by Dr. Octavius as the mob boss was proved to be a liability to the Friends of New Germany.

Like this? Let us know!
Retrieved from "https://marvel.fandom.com/wiki/Crime_Master_(Sammy)_(Earth-90214)?oldid=5080538"
Community content is available under CC-BY-SA unless otherwise noted.