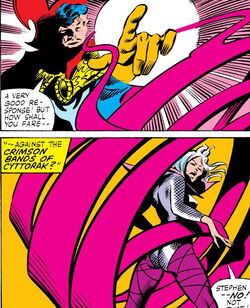 On Earth-9047, the equivalent to this spells seems to be the Crimson Bands of Cincinnati, that prompted the (really) Mindless Ones to dance. The Dreaded Dormamoomoo found this spell to be particularly stupid.[8]

On Earth-199999, the Crimson Bands of Cyttorak are a magical relic owned by the Masters of the Mystic Arts and stored in the New York Sanctum Sanctorum. Forged in Babylon during the 10th century BCE, the Crimson Bands of Cyttorak are capable of magically trapping individuals. During his skirmish with the Zealots, Doctor Strange used the bands to imprison Kaecilius.[9][10][11]

In addition to the physical relic, the Crimson Bands of Cyttorak can also be magically summoned as red belts of energy and used to bind powerful opponents. On Titan, Doctor Strange briefly used this spell to bind one of Thanos' arms in a team effort to remove the Infinity Gauntlet.[12]

Like this? Let us know!
Retrieved from "https://marvel.fandom.com/wiki/Crimson_Bands_of_Cyttorak?oldid=6432375"
Community content is available under CC-BY-SA unless otherwise noted.