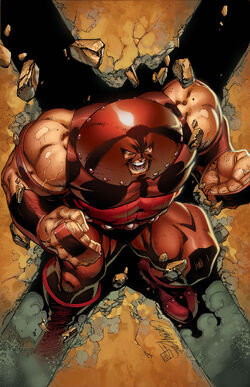 As the Juggernaut, Cain Marko wore a suit of armor made from a mystic metal from the Crimson Cosmos that he could summon at will that armor around his body. The armor included a helmet, and underneath it a skullcap made from the same metal (both preventing vulnerability to psionic attack).[1]

Stranded in Limbo without powers, Marko dragged the armor for thirty days, until he was able to locate the Crossroads. He relinquished the armor -"what [had] come before"- to the Signpost in order to return to Earth.

Marko later used another set armor that he acquired in yet unrevealed circumstances.[2]

Like this? Let us know!
Retrieved from "https://marvel.fandom.com/wiki/Crimson_Cosmos_Armor?oldid=6429115"
Community content is available under CC-BY-SA unless otherwise noted.