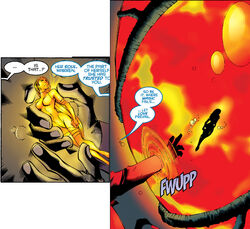 The Crimson Dawn is a mystical life-giving elixir kept within the realm of the same name, is a life-giving substance with vast mystical properties. Those near death who sip from the elixir will be granted new life, and an innate connection to the realm itself. There are side-effects, however. The most immediate side-effect is the appearance of a kana-like red mark over the left eye. As time goes on, the connection to the shadow realm grows, as is displayed by a darker, colder, harsher personality, and the development of the ability to travel through shadows. Lastly, the subject is taken over by the energies of the Crimson Dawn, and are either made servants (if the subject is willful enough), or simply mindless slaves. The Undercloaks are the lowest general representation of life after tasting the Dawn, although certain, more powerful subjects, the Dragons of the Crimson Dawn) retain their intelligence and will, though they are still bound to serve the Dawn and its proctor.[1]

The Crimson Dawn has apparently existed for ages. It is unclear when exactly the realm was formed, or if it had simply always existed. What is known is that sometime during the last years of the Ming Dynasty (circa 1640), China was overrun by "The Roaming King", Li-Tzu Ch’eng. A group of monks, Xiandu, A'yin, Barak, and Ra'al, in vengeance for the fall of the Ming Dynasty, sought out the "Covenant of the Ebon Vein", and were inducted on the promise that China would be freed from its oppressors. The four of them tasted the Crimson Dawn and were transformed. During the night, A'yin, Barak and Ra'al were corrupted by the Crimson Dawn's powers and murdered Xiandu. The former were transformed into the Dragons of the Crimson Dawn, and the latter would roam Earth as a spirit for centuries to come.[1]

Much later, the X-Man known as Psylocke after being critically wounded by Sabretooth. Wolverine and Archangel, embarked on a quest to save her life through the use of the Dawn. With the help of Doctor Strange and Gomurr the Ancient, the duo was able to defeat the Crimson Dawn's proctor Tar and cast the soul of Psylocke into it, saving her.[2] In order to save her life, Wolverine and Archangel traveled to New York's Chinatown to enlist the aid of Gomurr the Ancient in finding the Crimson Dawn. Doctor Strange, sensing their intentions, also joined them in their quest.[3] Together, the four of them sought out the Crimson Dawn, which was currently being protected by its proctor Tar. Though Psylocke was not with them to sip the elixir, Strange summoned the piece of Psylocke's soul she had entrusted to Archangel and tossed it into the Dawn itself. She was restored, though Strange sensed the true battle for Psylocke's soul had just begun.[4]

Strange was proven right as Psylocke slowly began to change. She became cold and distant, developing shadow teleporting abilities, as well as a gradual increase of her own telepathic abilities. [5]

At the same time, the misplaced Dragons of the Crimson Dawn found themselves in the Wildways, the home of Spiral, and forced her to join them and taste the elixir herself. She fought the Dawn's influence, but was forced to teleport the Dragons to Earth. They appeared in London, attacking Captain Britain and his fiancé Meggan.[6] The Dragons kidnapped Captain Britain and traveled to Hong Kong, where they intended to use him to breach the walls between Earth and the Realm of the Crimson Dawn.[1]

Spiral was able to alert Captain Britain's teammates, the group known as Excalibur, to the Dragons' plans, and the spirit of Xiandu also aided the team, namely Meggan, by guiding her.[7] Meggan was able to help Brian, and together, the couple managed to stop the Dragon's plans, though Brian was left powerless for some time afterwards.[8]

Finally, when the malevolent Kuragari murdered Tar, he became the new proctor of the Dawn, and sent his Undercloaks to claim Psylocke for his bride. They attacked Archangel and Psylocke in their apartment, leaving behind an engagement ring.[9] Gomurr came to warn them, but was too late, and Betsy, enchanted by the ring, slipped it on, allowing Kuragari to steal her away to his realm. Warren followed, but by then, Betsy had been brainwashed and transformed into Kuragari's Shadow Queen. She left him behind, going with Kuragari.[10]

Gomurr was next visited by the spirit of the deceased Tar, who named him the next rightful proctor of the Crimson Dawn. Gomurr accepted, and he joined Archangel in his fight.[11] In order to free Betsy from the Dawn's influence, Warren sacrificed a piece of his own life force to replace what had been given, and the couple was reunited. Gomurr managed to defeat Kuragari, becoming the next proctor of the Dawn.[12]

Like this? Let us know!
Retrieved from "https://marvel.fandom.com/wiki/Crimson_Dawn?oldid=6429366"
Community content is available under CC-BY-SA unless otherwise noted.