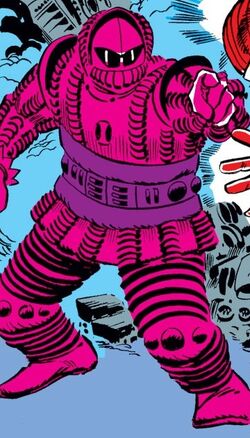 The original armor was created by Anton Vanko for the Soviet Union to compete with Tony Stark's Iron Man armor. Soon, the Soviets sent Vanko to the United States to kill Iron Man. They believed a Soviet armored hero publicly defeating an American armored hero on U.S. soil would land a devastating blow to the morale of the American people.[citation needed]

Vanko later destroyed the armor at the cost of his own life after Boris Turgenov attempted to reclaim it for himself, redeeming himself at the last moment.

The Crimson Dynamo was built out of a carborundum matrix alloy.

Its primary weapons were powerful blasts of electricity. The armor could also interfere with, or even gain control of, electronics.

Like this? Let us know!
Retrieved from "https://marvel.fandom.com/wiki/Crimson_Dynamo_Armor_Mark_I?oldid=6484859"
Community content is available under CC-BY-SA unless otherwise noted.