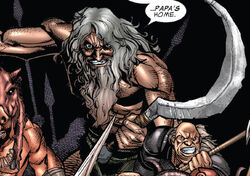 Eons ago, the primordial Sky Father Ouranus mated with the primordial Earth mother Gaea producing a number of powerful offspring: the Titans, the Cyclopes and centimanes. Ouranus feared his children would usurp his power so he imprisoned the centimanes and cyclopes in Tartarus, the dark abyss of the underworld. Gaea, disgusted with the treatment of her children urged the Titans to overthrow Ouranus. The youngest Cronus agreed and led his brothers into ambushing Ouranus in his sleep. He then castrated him with a sickle given to him by Gaea. A dying Ouranus prophesized that one of Cronus' own children when overthrow him just as he had overthrown Ouranus. Cronus then took his sister Rhea as his wife and became the new ruler of the Olympian dimension.[4]

Cronus ruled over a period of time on Earth remembered as a Golden Age. Supposedly the men of this time period need no law due to being naturally virtuous and obeyed Cronus unquestionably. However, Cronus feared Ouranus' prophecy so he kept the cyclopes and centimanes imprisoned in Tartarus. Any child Rhea bore him he either imprisoned in Tartarus or by his own account ate and imprisoned in his stomach to prevent them from being a threat. Rhea hid the youngest Zeus by tricking Cronus into swallowing a stone. When Zeus grew to adulthood he poisoned Cronus to vomit up his siblings and led them in a 10-year war with the Titans known as the Titanomachy. Zeus one the war by freeing the cyclopes and centimanes from Tartarus. With the strength of the centimanes and new weapons/powers granted by the cyclopes Zeus defeated the Titans. He imprisioned all of them including Cronus in Tartarus. He left only the female Titans, Titans who did not fight against him, and a few giants free. Zeus then took his place as the new Olympian skyfather.[5]

Eons later, during a series of battles when the mindless Hulk was sent to Olympus weakened one of the seals on Tartarus allowing Cronus to escape and lead a small army of giants in an attempt to take back Olympus. Cronus and his giants were quickly defeated by Hercules and Zeus' other offspring. Cronus himself was driven back into Tartarus and the breach sealed.[6]

Later, when Pluto put Zeus on trial for being an unworthy godhead Cronus was called to testify. He explained how Zeus rose to power through fraud, poison, and patricide and that Zeus deserved Cronus' punishment as much as Cronus himself.[5]

Superhuman Strength: Cronus possesses vast levels of superhuman strength and can lift 100 tons without using his other abilities to amp his strength.

Superhuman Durability: Cronus is highly resistant to physical injury. He is capable of withstanding high caliber bullets, falls from great heights, powerful energy blasts, and extreme temperatures and pressures without sustaining injury. He is also capable of surviving, unprotected, in the vacuum of space for a brief period of time. His resistance to injury surpasses that of many other Olympian gods.

Like this? Let us know!
Retrieved from "https://marvel.fandom.com/wiki/Cronus_(Earth-616)?oldid=5622063"
Community content is available under CC-BY-SA unless otherwise noted.