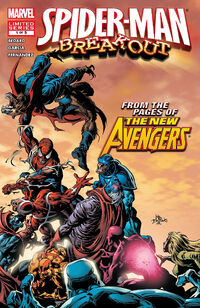 While in prison Crossfire (William Cross) met and befriended Vector (Simon Utrecht) of the U-Foes whose secret power to nullify technology, he hoped to exploit. Cross was imprisoned in the Vault where Rozalyn Backus part of Vault's Guardsman force. She seemingly stopped an escape attempt by Cross and the U-Foes, but it was revealed she stole cash and goods from the criminals, including Vector's power nullification chamber.[1] The criminals were later transferred to the Raft, and all escaped during Electro's mass breakout, Cross worked with a team of mind-manipulators: Mandrill, Controller, Mister Fear, and Corruptor. While on pursuit of Rozalyn the U-Foes and Crossfire's Crew fought a gang war until the New Avengers stopped.[2] Cross and his gang were recaptured and Backus surrendered herself to the authorities.[3]

Retrieved from "https://marvel.fandom.com/wiki/Crossfire%27s_Crew_(Earth-616)?oldid=5545908"
Community content is available under CC-BY-SA unless otherwise noted.