This page is possibly about two different subjects (the Crossroads associated to the Vodū gods, and the nexus to multiple planes), and could be split in the future depending on the publication of new material (Discuss).
The Crossroads 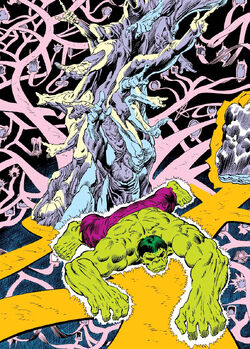 The Crossroads was an otherdimensional plane where the traditional laws of physics did not apply. The Crossroads served as a nexus point to an infinite number of alien dimensions, and there was even a signpost guiding all the explorers to the many different destinations,[1][verification needed] though it could be difficult to exit the Crossroads, and some wizards wandered decades there, going back and forth between the signposts.[2][3] The Crossroads could also grant access to various planets within Earth's own universe. There's yet no evidence confirming or denying that it included portals to alternate realities.[4]

The Crossroads could be accessed from everywhere, at long as one knew which door to open or what hole to crawl into.[2][3] From Limbo, the Juggernaut was able to locate and access the Crossroads.[5]

According to Molek, a Congolese would see the Afterlife as the Crossroads, where Papa Legba waited, and beyond that the jungles of Guinee (while a Christian would see the gates of New Jerusalem and a Muslim the gardens and rivers of Jannah).[6]

Despite the deep enmity between the Elder Gods Set and Gaea, Chthon and Oshtur, before the founding of Atlantis, they either created the Crossroads as one of the Inner Planes together,[2] or simply identified them as "neutral grounds" where they could meet.[3]

Years ago, when Bruce Banner was completely consumed by the rampaging fury of his alter ego the Hulk, Sorcerer Supreme Doctor Strange decided to exile the Hulk to the Crossroads. From there, the Hulk was able to travel to any planetary realm of his choosing, provided that it was a world devoid of any life forms that the Hulk could harm. The Hulk spent several weeks journeying from world to world, but invariably, he always returned to the Crossroads. Before long, the Hulk, through no choice of his own, left the Crossroads and returned to Earth. Its only other long term resident was the alien Puffball Collective, which was stranded there until freed by the Hulk.[7]

The cosmic entity Beyonder once visited several planes of the Multiverse (including the Microverse) before finishing his journey in the Crossroads.[1]

When Doctor Strange, Aurora, and Northstar needed to create a path from the Shining Realms (and were unable to do so from Earth, they went to the Crossroads and opened their portal from there.[4]

Stranded in Limbo, the Juggernaut (Cain Marko) was able to locate the Crossroads from there, and accessed them, relinquished his armor -"what has come before"- to the Signpost in order to return to Earth.[5]

The singular properties of the Crossroads do not amplify powers via chain reaction, but only give access to the dimensions. The U-Foes received such an upgrade while on Earth, thereby enabling Vector to repel reality itself.[9]

Like this? Let us know!
Retrieved from "https://marvel.fandom.com/wiki/Crossroads_(Dimension)?oldid=6046577"
Community content is available under CC-BY-SA unless otherwise noted.