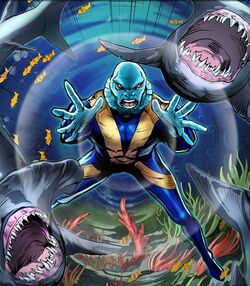 Enough of this madness. I am Atlantean. I care nothing for your surface disputes.

Crosta is a member of the Homo mermanus race better known as Atlanteans. The Homo mermanus just like their cousins the Homo sapiens have Mutants born within their society. Crosta was secreted away by his mother, Proctidae, after the abandonment of Atlantis, his father Opistho eventually discovered it. Proctidae brought the affair to the attention of their King Namor in order to keep the boy, as Opistho engaged a paternity suit.

When his mutant powers emerged he was ordered by Namor to attend a mutant school in San Francisco (Graymalkin Industries, current home of the X-Men), rather than remain with his mother or join his father in Latveria with the Atlantean military, he violently rejected the idea, attacking Namor. Reined in by Namor, he was sent to the X-Men.[1]

He was later shown in the waters below Utopia, guiding new Atlantean immigrants to the Citizen Intake Center at the base of the pillar supporting Utopia.[2]

After the Avengers attack on Utopia, Crosta was brought to the Avengers Academy place. Naturally siding with his fellow X-Men, he tried to avoid the confrontation between the two groups of students in jumping in the sea to rejoin his own kind but was stopped by Juston Seyfert's Sentinel. Once the mutants were let free to go, he left, intending to return to Atlantis.[3]

Although, he joined the Jean Grey School student body along the with other Utopian students,[4] and even attended to the Dance while the grown-ups X-Men and the Avengers confronted the Dark Phoenix,[5] and was part of the students for the second year of the Grey School.[6]

Crosta was an Homo mermanus, with the capabilities common to his species. As a Atlantean Mutant, he also possessed powers unique to him:

He used to release shockwaves when he got angry or lost his temper.

During his time at the Avengers Academy, Crosta was confirmed to be a mutant by Juston's Sentinel.[7]

Like this? Let us know!
Retrieved from "https://marvel.fandom.com/wiki/Crosta_(Earth-616)?oldid=5828764"
Community content is available under CC-BY-SA unless otherwise noted.