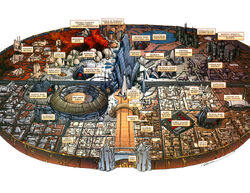 After he was captured by the Governor of the Wukar Province, the Hulk was sold as a gladiator slave in Crown City.[1]
He returned there to fight in the imperial arena with his Warbound brothers.[2]
They were then freed from slavery by the Silver Surfer and fled the city.[3]
Believing the Hulk was the Sakaarson, the city slaves then rebelled against the Red King.[4]
As the imperial troops were unable to stop him, the Red King ordered to release the Spikes against the Hulk.[5]
After the Red King's death, the Warbound won the war and conquered Crown City.[6]
Hulk was named the Green King and married Caiera Oldstrong.[7]
On the third day of his reign, the ruined S.H.I.E.L.D. Shuttle exploded, and a wave of nuclear energy spreaded across the planet, killing millions.[8]
Crown City was utterly destroyed and the Warbound left the planet.[9]

Like this? Let us know!
Retrieved from "https://marvel.fandom.com/wiki/Crown_City?oldid=4756514"
Community content is available under CC-BY-SA unless otherwise noted.