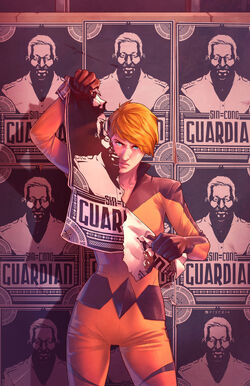 Crystal was the second child born to the Inhuman nutritionists Quelin and Ambur. She is considered part of the Royal Family of Attilan. Like her older sister, Medusa, Crystal was subjected to the Terrigen Mist when she was an infant, and the process endowed her with certain mental powers.[citation needed]

While she was still a child, war erupted, forcing Crystal and her kinsmen to flee Attilan. Crystal passed through adolescence into young adulthood while wandering with her kinsmen through Asia, Europe, and finally America in search of Crystal's amnesiac sister Medusa. When they finally caught up with Medusa in New York, Medusa had sought refuge with the Fantastic Four, mistaking her kinsmen for her enemies. Crystal then met Johnny Storm of the Fantastic Four[7] and the two began a romantic relationship that survived Crystal's return to Attilan and a lengthy separation.[8]

Crystal eventually returned to New York and served as a substitute member of the Fantastic Four during the Invisible Girl's first pregnancy and post-childbirth. During this time Crystal performed quite admirably as Susan Storm's replacement and effectively defeated the Wizard all by herself.[9] Crystal was forced to return to Attilan when her health became impaired by prolonged exposure to pollutants in the atmosphere.[10] However, en route to Attilan, Crystal became a pawn in a plan by the alchemist Diablo,[11] and then happened upon the mutant-identifying Quicksilver, who had been wounded in battle with the Sentinels.[12]

She brought Quicksilver back to Attilan, nursed him back to health, and became romantically involved with him. The Human Torch soon learned of Crystal's change in affections, and after a futile battle with Quicksilver, terminated his relationship with her. Crystal and Quicksilver were wed shortly thereafter, theirs being the first marriage between an Inhuman and a human (albeit a human mutate) in recorded history.[13]

Crystal and Quicksilver conceived a child, a girl bearing no apparent Inhuman or mutant characteristics, whom they named Luna after the world on which she was born. While Quicksilver wanted to exercise the father's right to have his child subjected to the Terrigen Mist, Crystal convinced him to let her grow up normal.[14][15]

Eventually, Crystal and Quicksilver's marriage began to deteriorate, due to Quicksilver's temper, which may have been aggravated by the evil Inhuman, Maximus the Mad. Dissatisfied, Crystal briefly had an affair with another man.[16] Crystal left Quicksilver and Attilan with Luna and her nanny, Maya, and returned to the Fantastic Four. Although she searched for the relationship she once had with Johnny, he was then married with Alicia Masters (later revealed to be a Skrull agent named Lyja).[17] Crystal returned to Attilan to deal with a crisis posed by Medusa and Black Bolt's child. Amidst the troubles, she and Quicksilver reconciled.[18]

Later, the Inhumans were attacked by the alien Brethren, and Crystal sought out the Avengers for their help. Shortly there after she joined them, moving into the Avengers Mansion with Luna and nanny, Marilla.[19]

During her tenure with the Avengers, she developed an attraction with teammate Dane Whitman, the Black Knight. This relationship was complicated by a contrite Pietro trying to fix their marriage, and the available and aggressive Sersi pursuing Dane at the same time. Crystal recommitted to Pietro when he returned to the Avengers[20] and Dane and Sersi were soon transported to another universe, ending their thoughts of an affair.[21]

Crystal was among the Avengers who seemingly sacrificed themselves to end the menace called Onslaught.[22] Actually transported to a different reality created by Franklin Richards, Crystal was restored when the heroes returned.[23]

When the heroes, who were believed dead, returned to Earth, Crystal and Quicksilver were reunited. Both helped the Avengers reassemble. Crystal returned to Attilan, where she remained beside the Royal Family, raising Luna.[24][25]

Earlier, Quicksilver had revived the Knights of Wundagore (actually animals mutated into humanoids by the High Evolutionary) and encountered Black Knight and his hero team, the Heroes for Hire. The two would eventually fight over Crystal's affections, whereupon an embittered Crystal estranged herself from Quicksilver again.[26]

More recently, the Inhumans were captured by the alien Kree, the original creators of the Inhumans. The Kree judge and warrior, Ronan the Accuser, hoped to use the Inhuman Royal Family to assassinate the Kree's enemy, the Shi'ar empress Lilandra. Black Bolt single-handedly duelled and defeated Ronan, but the Inhumans turned away from him, deposing him by decree and exiling him. The Royal Family returned to Earth, monarchs with no people.[27][28]

After the events of House of M, Crystal was reunited with her depowered husband, only for him to steal the Terrigen Mist from Attilan, in an attempt to use it to restore the depowered mutants. Luna was exposed also, granting her various abilities.[29]

During the events of Silent War, the Inhumans located Quicksilver, who allowed Black Bolt to beat him in response to his betrayal and informed him that by Inhuman law their marriage had been annulled. Crystal participated in a series of battles against S.H.I.E.L.D. and the Mighty Avengers when the Inhumans declared war on the United States.[30]

The Inhuman royal family travelled into Kree space, seeking an alliance against the invading Skrulls who they wished they rescue Black bolt from. Ronan the Accuser welcomed this alliance, but only on the condition that Crystal would become his bride. Medusa agreed on her behalf, much to Crystal's chagrin which led to a fight between them as Crystal got her sister to trust her enough to allow her to run their particular part of the mission to rescue Black Bolt from the Skrulls in her own way.[31]

Crystal's marriage to Ronan proceeded, even following Black Bolt's decision to usurp the throne of the Kree. She came to accept the idea of the marriage, defending it to her sister-in-law Polaris as a matter of statecraft (though there are indications that Ronan wished for more). The wedding proceedings were interrupted by the Shi'ar Imperial Guard, who attacked as part of Emperor Vulcan's invasion of the Kree Imperium. Ronan was beaten nearly to death in this attack. While visiting Ronan in recuperation, Crystal inadvertently helped rally the Kree people when she showed compassion towards injured Kree commoners. Acts which (thanks to Polaris) were eventually broadcasted over the Kree networks. This led to her being referred to as the "people princess" among some of the Kree people. Crystal was eventually separated from Ronan under the orders of Black Bolt, as part of a truce made between Black Bolt and the Supreme Intelligence to ensure peace between Inhumans and the Kree Empire before they stepped down as rulers. Crystal and Ronan were deeply saddened by this decision, as their arranged marriage had eventually become a stronger relationship based on deeper feelings of love.[6]

Crystal was made an ambassador by her sister Queen Medusa and tasked with overseeing diplomatic relations, recovery efforts with other countries who have been or will be affected by the Terrigen Cloud. Her entourage included Gorgon, Naja, Flint, and Grid. In command of the Royal Inhuman Vessel, which was nicknamed the R.I.V. by her assistant Swain, Crystal invited members of the United Nations to come aboard the vessel for an inspection so she could convince the U.N. that the Inhumans were on their side.

As the tour came to an end, the X-Man Frenzy smashed her way into the vessel with hopes to destroy it since she blamed the Inhumans for the chemical attack on her people. Luckily Crystal intervened using her elemental abilities to entrap Frenzy in a hydro-kinetic bubble and shot her out of the ship's airlock. Later it was revealed that the whole fight was staged in order to gain the UN's support. Frenzy allied herself with Crystal in exchange for their help with saving mutants from the effects of the Terrigen.

Three months later, Crystal visited the city of Sydney, Australia in order to help with humanitarian needs when she came across a huge protest in the main square of the city. A group of rioters were showing off a captive Nuhuman saying how humanity's numbers were dwindling because of the chemical attack created by the mist. Crystal approached the man in charge of the protest to have their captive released without resorting to violence. Her suggestion only agitated the situation further and was attacked by the group. She used her abilities to make quick work of them but found resistance in one of their members who ended up being a Nuhuman in disguise but who was disgusted with what he was turned into.

Jack along with Crystal were being attacked by his own group. By this time Crystal's cousin showed up with Grid and Flint. Flint used his geokinetic powers to create rock arms extending from the ground to hold Jack. Crystal had Naja release the captured individual who introduced herself by the name of Ash. Going to the R.I.V., Crystal received a message from Swain letting her know the next location the cloud was going to hit, the country of South Korea whose leader was Ban Ki-moon.[32]

Elementalist: Crystal possesses the ability to mentally manipulate the four classical elements: fire, water, earth, and air. She does so by means of a psionic interaction with the substances on an atomic level. Certainly, Crystal can manipulate anything that involves elements.[citation needed]

Has some training in hand to hand combat.[citation needed]

Crystal possesses the normal strength of a female Inhuman who engages in moderate regular exercise. Due to generations of eugenics, Inhumans are superior to humans in strength, reaction time, stamina, resistance to injury and speed.[citation needed]

Crystal can sustain a certain elemental phenomenon for approximately one hour before her mind begins to tire. She can also create any number of effects in succession for about forty-five minutes before mental fatigue impairs her performance.[citation needed]

Like this? Let us know!
Retrieved from "https://marvel.fandom.com/wiki/Crystalia_Amaquelin_(Earth-616)?oldid=6452972"
Community content is available under CC-BY-SA unless otherwise noted.