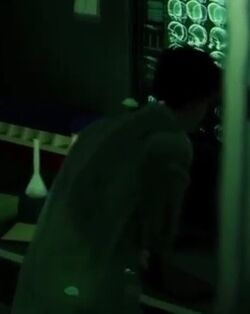 Dr. Curtis "Curt" Connors was a medic in St. Martin Hospital who helped Peter Parker when he injured his shoulder.

At an unknown point in both Curt and Peter's life, Curtis became a humanoid reptile that would become one of Spider-Man's earliest foes until Peter created a cure using Curt's blood. The cure only worked temporarily, however, and soon The Lizard was apparently back, roaming around somewhere in NYC. Peter kept the vial of blood as a memento.[1]

He is later seen in his human form working for Norman Osborn, examining and studying the latter's son and his disease. Norman ordered him to release Harry from his container, angrily insisting against Connors' advice, leading Connors to do so.[2]

Like this? Let us know!
Retrieved from "https://marvel.fandom.com/wiki/Curtis_Connors_(Earth-1048)?oldid=6437893"
Community content is available under CC-BY-SA unless otherwise noted.