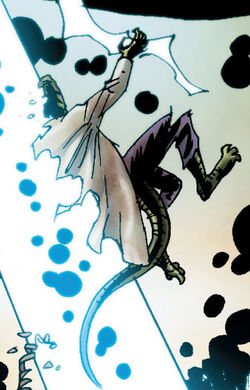 Little is detailed about Lizard's life before the zombie plague arrived on Earth-2149, however it can be presumed that it followed much the same path as Lizard of Earth-616.

The Lizard, like almost every other hero and villain, has become an undead zombie. Lizard is apparently destroyed when he is blasted apart by the machine the cosmic galacti build to take down Galactus.[1]

Seemingly those of the Curtis Connors of Earth-616.

Like this? Let us know!
Retrieved from "https://marvel.fandom.com/wiki/Curtis_Connors_(Earth-2149)?oldid=5493397"
Community content is available under CC-BY-SA unless otherwise noted.