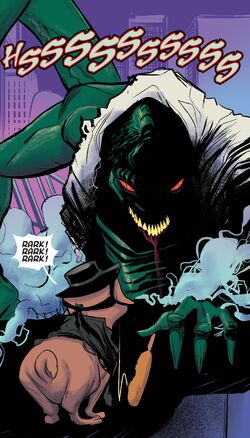 Dr. Curtis Connors was a former scientist working as a school teacher at Midtown High School. He developed the Connors Formula, which was used by young Peter Parker to transform himself into the Lizard. Doctor Connors disappeared on the night when Parker was defeated and accidentally killed by the Spider-Woman.[1] It was later revealed that he was captured by S.I.L.K. and used as one of Cindy Moon's test subjects for his own formula, becoming a Lizard himself.[2]

Like this? Let us know!
Retrieved from "https://marvel.fandom.com/wiki/Curtis_Connors_(Earth-65)?oldid=5708835"
Community content is available under CC-BY-SA unless otherwise noted.