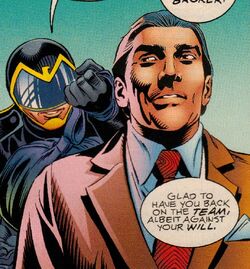 Curtiss Jackson aka the Power Broker was the head of the criminal organization of power brokers known as The Corporation's West Coast division. He later founded his own company Power Broker, Inc. who tried to recreate the Super-Soldier Serum giving paying customers the opportunity to increase their strength to superhuman levels.[2]

Curtiss Jackson was formerly the West Division leader of the Corporation. Captain America, Marvel Man, and the Hulk defeated the Corporation's sinister plot. As an agent of the Corporation, Jackson allied himself with Eugene Stivak and the faux Super-Shield agent the Vamp.[citation needed]

Later, Jackson emerged as the "Power Broker" imparting super-powers to individuals who paid his price for augmentation. Unfortunately for some of his subjects, many became deformed freaks during the process.[citation needed]

When he was targeted by the Scourge of the Underworld organization, Jackson desperately underwent the augmentation process himself for protection, but was turned into a deformed freak who couldn't move without the use of a mechanized exoskeleton.[citation needed]

He was eventually killed by the Punisher, and his body was seen lying in the Punisher's base of operations, where he was surgically removing a chip in Jackson's arm.[3] After his death, a different person took up his mantle.[4]

Like this? Let us know!
Retrieved from "https://marvel.fandom.com/wiki/Curtiss_Jackson_(Earth-616)?oldid=6435313"
Community content is available under CC-BY-SA unless otherwise noted.