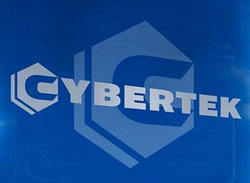 Cybertek Corporations is a technological development company that division Cybertek Technologies developed a robotic leg as part of "Project Deathlok". Project Deathlok was started in 1990 for its first test subject, John Garrett, creating cybernetic parts to replace what he lost in an IED explosion.[1]

While transporting the leg across the Italian countryside, the train carrying the package was attacked by S.H.I.E.L.D. agents led by Phil Coulson. Cybertek's security force fended off the S.H.I.E.L.D. agents on the train, and successfully delivered the leg to Ian Quinn, where it was attached to one of Project Centipede's newest recruits, Mike Peterson.

Once the Cybertek leg had been fully grafted to his stump, Peterson acted on orders of the Clairvoyant to kill the remaining security escorts that had delivered the leg.[2]

Coulson and May infiltrate the Cybertek HQ in Palo Alto, determining that the company is what connects to Hydra and Garrett, masquerading as former S.H.I.E.L.D. scientists, while Agent Skye attempts to hack their mainframe in order to activate the Trojan Horse virus she implanted in Hydra's systems. However, they discover that Cybertek possessed no mainframe, only physical files. The agents then steal an entire cabinet containing information on Project Deathlok.[1]

Coulson's team later assaulted Cybertek's New Mexico facility to stop Garrett. While Coulson and Agent Triplett commandeered an armoured carrier to provide a distraction, May and Skye infiltrated the Centipede soldier control center, with the intended effect of having the soldiers reverted to default directive, to defend Garrett at all costs. May then ushered the soldiers' handlers out of the room while Skye interrogates the boss, Kyle Zeller, whose own wife was being held captive to use against him. After Garrett's defeat, Coulson's team liberates all the captives under Cybertek's "Incentives Program".[1]

Retrieved from "https://marvel.fandom.com/wiki/Cybertek_Corporation_(Earth-199999)?oldid=5582014"
Community content is available under CC-BY-SA unless otherwise noted.