The visored mask Cyclops wears to prevent random discharge is lined with powdered ruby-quartz crystal. It incorporates two longitudinally mounted flat lenses which can lever inward providing a constantly variable exit slot of 0 inches to .79 inches in height and a constant width of 5.7 inches. The inverted clamshell mechanism is operated by a twin system of miniature electrical motors. As a safety factor there is a constant positive closing pressure provided by springs. The mask itself is made of high-impact cycolac plastic. There is an overriding finger-operated control mechanism on either side of the mask, and normal operation is through a flat micro-switch installed at the base of the thumb on each glove.[citation needed] 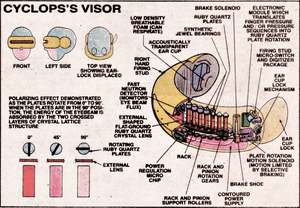 Cyclops has used at least five different versions of the visor, the first four were gold or bronze in color, and the fifth is black.[citation needed]

Like this? Let us know!
Español Italiano
Community content is available under CC-BY-SA unless otherwise noted.
Advertisement