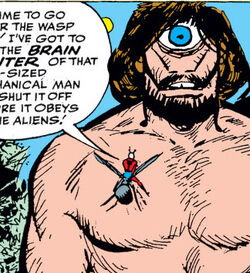 This mysterious creature was seizing boats off the coast of Greece. The vacationing duo of heroes Ant-Man and Wasp investigated and determined that this was part of an alien plot by the race of A-Chiltarians. Henry Pym determined that the "Cyclops" was a robot, designed to look like the mythological monster of lore. Ant-Man overrode the robot's programming and turned the Cyclops on his former controllers. The aliens fled earth, abandoning their plans for conquest. Pym had the Cyclops return the boats he had captured and then ordered it to walk out into the sea, apparently self-destructing.[1]

Like this? Let us know!
Retrieved from "https://marvel.fandom.com/wiki/Cyclops_(A-Chiltarian_Robot)_(Earth-616)?oldid=5535214"
Community content is available under CC-BY-SA unless otherwise noted.