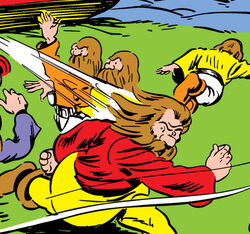 The Cygnians are a dwarfish race of creatures that are located on the "star" known as Cygni. They are a race of primitives that dwell underground. They were first encountered when Zephyr Jones and his colleagues Corky Grogan, Professor Lexico, and Lexico's daughter Tesi. Zephyr and Corky were attacked by the creatures while the Lexicos were captured. Fighting their way free, Zephyr and Corky found their friends held captive in the underground tunnels where the Cygnians lived. Freeing the Lexicos, the humans escaped by causing an avalanche that buried their attackers. They soon left Cygni.[1]

The Cygnians were capable of holding their own against normal sized humans.

Atmosphere was not compatible with humans, and to live unaided a person from Earth would have to be doused with a chemical of Professor Lexico's design.

Although Cygni was referred to as a "star", it was likely incorrectly classified by Professor Lexico. Cygni is either a planet or a micro-planet.

Like this? Let us know!
Retrieved from "https://marvel.fandom.com/wiki/Cygnians?oldid=5433491"
Community content is available under CC-BY-SA unless otherwise noted.