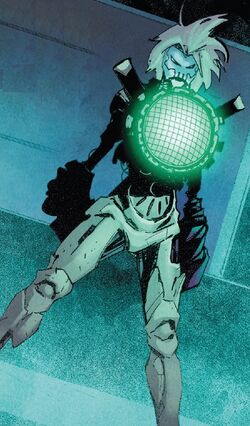 Formerly a pilot, Cylla Markham agreed to help Banshee and Forge find their missing teammates, but the plane was shot down by Fenris.[1] Critically injured, Cylla was rushed to a hospital where she was invited by Donald Pierce to join his Reavers in exchange for transforming her into a cyborg, thereby replacing her damaged body.[2]

Though she was replacing the original Skullbuster, Cylla mainly went by her real name. Her first mission brought her into contact with Wolverine, though she was defeated by the combined efforts of Jubilee and Yukio.[3] After the supposed deaths of the other Reavers, Cylla and Lady Deathstrike fled.[4] Cylla later resurfaced, allying herself with Bloodscream in an attempt to murder Wolverine; however, Bloodscream betrayed her and sucked the life from her, killing her.[5]

She later returned alongside her fellow Reavers attempting to steal the body of Wolverine from its adamantium cocoon, only to discover the cocoon empty after the body had been removed and buried elsewhere. Skullbuster and the Reavers were then apprehended by the X-Men and placed in the custody of Alpha Flight,[6] who transferred them to General Callahan and the O*N*E.[7]

Like this? Let us know!
Retrieved from "https://marvel.fandom.com/wiki/Cylla_Markham_(Earth-616)?oldid=6076198"
Community content is available under CC-BY-SA unless otherwise noted.