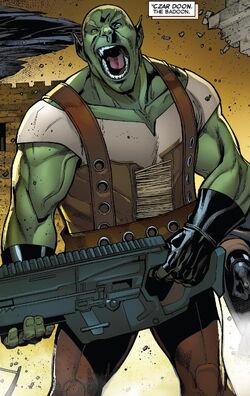 Czar-Doon was a Badoon.[1] He was a member of Yondu's Ravagers at the time when Peter Quill was in the team.[2]

After affiliating himself with Thanos, Czar-Doon landed with him in Nevada to verify Arthur Douglas' death.[1]

Much later, Czar-Doon and his teammates of the Slaughter Squad stole the Black Vortex for Mister Knife,[3] and had his cosmic potential unleashed by the artifact,[4] but it seemingly worn out at some point.

Like this? Let us know!
Retrieved from "https://marvel.fandom.com/wiki/Czar-Doon_(Earth-616)?oldid=5658493"
Community content is available under CC-BY-SA unless otherwise noted.