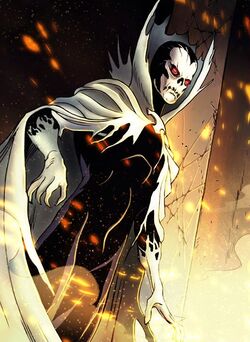 Like each of the Fear Lords, D'Spayre was a mystery, and his origin (or even his very existence) was known to few.[2][3]

The Demon known as D'Spayre was created 20,000 years ago by the Dweller-in-Darkness, using the fear originated from the sinking of Atlantis and Lemuria.[4]

D'Spayre was one of the Lords of the Splinter Realms.[5]

D'Spayre was encountered at the Nexus of All Realities. He captured young sorceress Jennifer Kale and the spirit of her deceased teacher, Dakimh. He tied them both to an arcane tower on the Nexus, trying to use the evil mystic energies of the tower to corrupt his prisoners so that they would use their magic powers to serve D'Spayre. D'Spayre had killed Dakimh's mentor Zhered-Na centuries ago.[6]

However, Spider-Man and the Man-Thing fought D'Spayre. Although D'Spayre used his powers to overcome Spider-Man with fear, Spider-Man managed to knock out D'Spayre. Kale and Damikh were freed soon afterwards.[6]

Since then, D'Spayre has recurred to more subtle plans. He decided he did not know enough about Earthlings, specially superhumans. He appears to lonely victims using his powers to make them despair; one of these victims was Jock Forrester, father of Aleytys "Lee" Forrester, who would later be a partner of Cyclops and later of Magneto.[7]

D'Spayre urged his fellow Fear Lords to attack Earth in an attempt to gain power, but they were unsuccessful.[8]

Spite, his sister, sought to depose him by using the Juggernaut.[9]

D'Spayre was one of the Lords of the splinter Realms called by Magik to discuss the threat of the Archenemy.[10]

D'Spayre is capable of causing fear and despair via illusions and hallucinations. He is capable of reading his victims' minds and/or emotions to bring out their deepest fears.[citation needed]

D'Spayre feeds off negative emotions. (Some believe that D'Spayre does not need to feed on emotions, but does so because of sadistic pleasure).[citation needed]

D'Spayre is normally intangible. He does not seem to age, nor need sustenance.[citation needed]

D'Spayre can travel to various dimensions, presumably via teleportation.[citation needed]

Like this? Let us know!
Retrieved from "https://marvel.fandom.com/wiki/D%27Spayre_(Earth-616)?oldid=6016992"
Community content is available under CC-BY-SA unless otherwise noted.