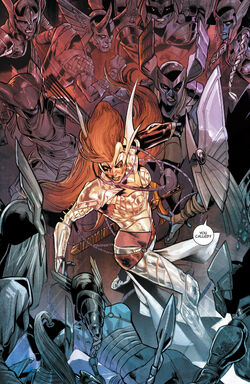 The Dísir were the Valkyries of Bor. Having rebelled against him as well as nature, they had begun "feeding" on gods, in fact having intercourse with Sigurd and his troop. Once discovered, they were cast out from all realms, existing in the spaces between realms in spirit-form alone. Due to the nature of their crime, Bor cursed them, only to consume the shades of gods exiled from their true homes, so they would be hungry forever.[citation needed]

During the Siege of Asgard, the Dísir tried to feed on the Asgardians who were slain, but soon made a quick retreat when encountering Valkyrie (Dani Moonstar).[citation needed]

Kid Loki gained control of them and bartered their services to Mephisto in exchange for him granting Hela a small corner of his realm for her to establish a new Hel.[citation needed]

Thanks to the manipulations of Kid Loki, the Dísir were eventually freed from their curse by Bor, returning to their old selves. They became the personal Valkyries of Hela and swore that, upon his death, they would take vengeance on Sigurd for his past crimes.[citation needed]

After Angela kidnapped her own sister[3] and disappeared with her from the all-seeing Heimdall's sight, Odinson went to Hel to ask for Hela's help to capture his rogue sister and rescue the baby. Hela helped them by calling the Dísir so they could hunt Angela.[4]

Odinson cried their name and it raced to all corners of creation. Angela was heading to Heven with the Guardians of the Galaxy's help when she heard Odinson's cry, only her being able to hear it. She then repeated it, inadvertently summoning the Dísir into the Guardians' ship. A fierce battle ensued between the Dísir and the Guardians. While her sisters were battling the Guardians, Brün worked out the ship's location and revealed to the Guardians that the baby Angela was carrying with her was the kidnapped newborn baby of Odin and Freyja before being decapitated.[1]

Following Angela's explanation of what was happening to the Guardians, they threw the Dísir, who were left in pieces (literally), into space, from where Hela recovered them. In Hel, Brün told Hela and Odinson that Angela was taking the girl to Heven, and so the Odinson went to save his sister.[5]

During the War of the Realms, the Dísir were recruited by the Enchantress behind Hela's back to further her conquest of South America on the promise of freedom. Their attention was caught by the Champions, who fought to push back the Draugr's forces in São Francisco Xavier, Brazil. The Dísir managed to overpower the young heroes until their very existence began to power up Power Man. His abilities allowed him to absorb ambient cultural energy, and worked specifically well with ancient beings such as the Dísir. Following their defeat, the Dísir teleported back to Hel, where they were forced to answer to Hela for their treachery.[6]

As Valkyries, the Dísir possess the conventional abilities of an Asgardian god including class 30 Superhuman Strength and enhanced durability. Several of them possess additional powers such as skills in magic. All are trained in a variety of weapons and can use teamwork to defeat much stronger opponents.[citation needed]

In their cursed state, the Dísir were immune to all damage except the "souls" of others. Most passed right through them and blows from Thor's hammer barely affected them. They could instantly be summoned by anyone who called their groups name regardless of barriers in place, slice their target to pieces, and depart without anyone noticing.[citation needed]

Retrieved from "https://marvel.fandom.com/wiki/Dísir_(Earth-616)?oldid=5604824"
Community content is available under CC-BY-SA unless otherwise noted.