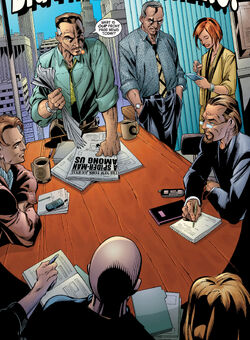 The Daily Bugle is a New Yorker newspaper led by J. J. Jameson. Peter Parker was employed to work on the newspaper's website.

During Magneto's Ultimatum Wave, the building of the Daily Bugle damaged, forcing the company to temporarily close down.[1] Within six months after the events of Ultimatum, the Bugle was re-opened as a Web-Only news distributor, eliminating the printing of newspapers from the company. [2]

Retrieved from "https://marvel.fandom.com/wiki/Daily_Bugle_(Earth-1610)?oldid=5676543"
Community content is available under CC-BY-SA unless otherwise noted.