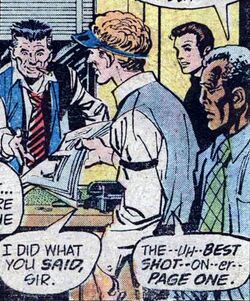 The Daily Bugle seemingly had a similar history as its Earth-616 counterpart.

Employees of the Daily Bugle were present for the assassination of Tom Maslow.[2]

The Battle of the Century

Peter Parker thought he had brought J. Jonah Jameson exclusive photos from Spider-Man and Doctor Octopus' recent battle, only to find out that all his photos were blurry. Once Jameson found out, he chewed Parker out. The following day, the Bugle when to a space exploration demonstration. There, Jameson and Parker butted heads. Luckily, all was forgiven when Peter gave him pictures of Spider-Man's meeting with Superman and Jonah gave him a bonus.[3]

The Heroes and the Holocaust

For a brief period of time, Jameson pushed Peter to leave the Bugle and join their competitors, the Daily Planet. During his leave of absence, Planet reporter Clark Kent joined the Bugle as long as he was in New York City. Eventually; however, the two would return to their original employers.[1]

Jameson went to interview the leader of Youngblood, Shaft, taking Parker with him to photograph. When they arrived at the hotel they were staying at, they learned that Shaft had left the building and had Badrock take his place. Unexpectedly, Rhino, actually a hologram, attacked their meet-up place. Badrock went down to stop him and Peter left in the confusion to help Badrock as Spider-Man.[5] Back at the office, Jameson was writing slander on Youngblood when Parker surprised him by giving him the chance to interview the whole team, under the condition he pay him three times his normal rate.[6]

The Daily Bugle reported on the outcome of Jackie Estacado's trial.[7]

Retrieved from "https://marvel.fandom.com/wiki/Daily_Bugle_(Earth-7642)?oldid=5546010"
Community content is available under CC-BY-SA unless otherwise noted.