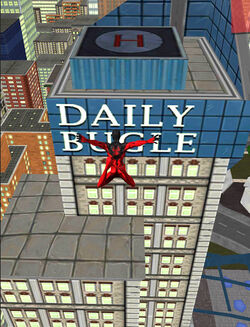 I've built a newspaper empire, but my eyes are getting so bad I can barely read the small print.

The Daily Bugle seemingly had a similar history as its Earth-616 counterpart. It was established and led by J. Jonah Jameson, with Robbie Robertson briefly taking his spot during Jonah's time as mayor. They were famous for printing libel against Buzz and Spider-Man. Ironically, Buzz was Jonah's alternate reality grandson and Spider-Man was a Bugle photographer.[1]

Retrieved from "https://marvel.fandom.com/wiki/Daily_Bugle_(Earth-TRN461)?oldid=5281578"
Community content is available under CC-BY-SA unless otherwise noted.