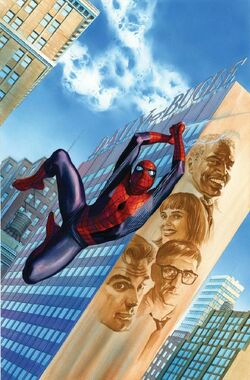 Founded by former Daily Bugle's and Alternative journalists Ben Urich and Sally Floyd as a true independent media, the Front Line was supported by a mysterious man who intended to "make waves", offering to them the Alternative resources. Became a haven for quitting or fired staff from the DB! of Dexter Bennett.

It was later used as a base to rebuilt the Daily Bugle after the period under Dexter Bennet reign and his destruction by Electro.
Reality
Earth-616
Status
Active
Base of Operations
Daily Bugle Newsroom (who was formerly Alternative then Front Line Newsroom)
Creators and Appearances
Creators
Paul Jenkins, Ramon Bachs
First Appearance
Civil War: Front Line #11
(April, 2007)
(as the Front Line)

Toward the end of the superhero Civil War, Sally Floyd quit the Alternative and joined with Ben Urich, who left the Daily Bugle, to create a truly independent newspaper. When it almost failed, a mysterious benefactor (in fact J. Jonah Jameson) bought out the Alternative and handed it over to Ben Urich, who renamed it Front Line and became its editor-in-chief. Sally Floyd became the lead reporter.[1]

Dexter Bennett bought the Daily Bugle off Jameson while Jameson was ill. After buying the Bugle, Bennett renamed the Bugle as "The DB!" and transformed it into a scandal sheet. This led Peter Parker, Robbie Robertson, and many others who worked at the Daily Bugle to leave the DB and move to Front Line, especially after the DB! Building was destroyed by Electro, and Bennett didn't bother to rebuild.[2]

Sometime after, Marla Jameson was able buy back the Daily Bugle shares from Bennett, and Jameson gave the money to Robertson to remake the Front Line into the new Daily Bugle.[3]

Like this? Let us know!
Retrieved from "https://marvel.fandom.com/wiki/Daily_Bugle_(Front_Line)_(Earth-616)?oldid=5642204"
Community content is available under CC-BY-SA unless otherwise noted.