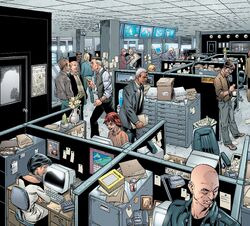 The Daily Bugle later DB!, is an American tabloid newspaper based in New York City. It operates from the Daily Bugle Building located on 39th Street and Second Avenue. It was once one of the most read newspapers in the United States of America.

Founded in 1897 on the streets of New York, The Daily Bugle was a daily tabloid newspaper read by the citizens. The publication constantly edged out rival The Daily Globe to be the most read newspaper in the country.[citation needed]

In the 1930's, Scoop Daly worked for the Bugle, and he and other journalists working for it often became involved in the adventurer Night Raven's adventures.

A man named Jameson worked for the Bugle, once almost catching a picture of an unmasked Captain America. This man later served as an editor, directing C. Thomas Sites. He served as publisher in 1945, when the Daily Bugle printed a story alleging, correctly despite official denial, that Captain America had been lost at sea.[citation needed]

The long-time publisher of the Bugle, J. Jonah Jameson, began his journalistic career as a reporter for the Bugle while still in high school. Jameson purchased the then-floundering Bugle with monies obtained from assets inherited, and turned the paper into a popular success. Other magazines published from time-to-time include the revived NOW Magazine and the now-defunct Woman Magazine.

J. Jonah Jameson, Inc. purchased the Goodman Building on 39th Street and Second Avenue in 1968 and moved its entire editorial and publishing facilities there. Now called the Daily Bugle Building, the office complex is forty-six stories tall, and is capped by the Daily Bugle logo in 30-foot letter on the roof. There are loading docks in the rear of the building, reached by a back alley. Three floors are devoted to the editorial office of the Daily Bugle, two sub-basement levels for the printing presses, while the rest of the floors are rented.[citation needed]

The newspaper is noted for its anti-superhero slant, especially concerning Spider-Man, whom the paper constantly smears as a part of its editorial policy. However, the Editor-in-Chief, "Robbie" Robertson, the only subordinate to Jameson who is not intimidated by him, has worked to moderate it.[citation needed]

Due to declining circulation, Jameson conceded to Robertson's objections and has created a special feature section of the paper called The Pulse which focuses on superheroes. In addition, the paper also intermittently ran a glossy magazine called NOW Magazine.[citation needed]

The New Avengers decided to strike a deal with Jameson regarding exclusive content in exchange for removing the strong Anti-Spider-Man vibe from the newspaper, to which Jameson agreed. Merely one day later, Jameson had already gone back on his word with Iron Man, using the headline "a wanted murderer (Wolverine), an alleged ex-member of a terrorist organization (Spider-Woman) and a convicted heroin-dealer (Luke Cage) are just some of the new recruits set to bury the once good name of the Avengers". This caused Jessica Jones to sell the first pictures of her newborn baby to one of the Bugle's competitor's instead.[citation needed]

Recently The Daily Bugle hit on hard times which led to it being offered by a buyout by Dexter Bennett. This forced Jonah to stop everyone's checks to build the capital needed to save the paper, with everyone at the Bugle working temporarily for free as a sign of solidarity. After Jonah Jameson suffered a heart attack, his wife sold the Bugle to Dexter Bennett, who changed the name to The DB and transformed it into a scandal sheet. However, the reputation of the DB plummeted down because of the new, scandalous angle Bennett gave it.

Several reporters unwilling, or refusing the new course, like Peter himself, were forced to go away, finding a new safe haven in the Frontline, the only magazine willing to accept people fired by Bennett, pursuing a scorched earth policy over them. The Daily Bugle was later destroyed by Electro. Later after their shares were reacquired from Bennett, Mayor Jameson turned the money over to Joe Robertson to have the Frontline offices remade into the new Daily Bugle.[citation needed]

Like this? Let us know!
Retrieved from "https://marvel.fandom.com/wiki/Daily_Bugle_(The_DB!)_(Earth-616)?oldid=6559765"
Community content is available under CC-BY-SA unless otherwise noted.