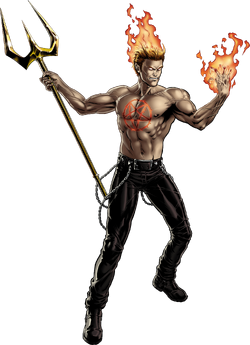 You're either incredibly brave or a glutton for suffering if you want me in your team, Agent. In the interests of friendship, let's say it's bravery. Count me in.

Daimon Hellstrom was born from the plan of a demon, which took human form, to acquire influence on Earth. When he discovered later in his life his demonic heritage, Daimon rejected his father's plan and even decided to dedicate his life the fight his father's evil. When he traveled to the infernal realms himself, he stole his father's Netheranium trident and managed to tap into his own mystical abilities. Daimon's power grew until he became one of the most powerful warriors in the fight against Demonkind, calling himself the Son of Satan.[1]

Sins of the Fathers

Daimon had followed The Hood's plans, and after numerous extradimensional portals appeared in Fisherman's Wharf, in San Francisco, he found himself against Robbins himself, and Baron Mordo, after he figured out their plan to bring out Blackheart's skeleton with the purpose to bring him back to life. While assisting S.H.I.E.L.D.'s Alliance, he managed to defeat Mordo and The Hood, and even Hydra forces who were attracted by the mysterious event, but he couldn't prevent the ritual from being successfully performed, and Blackheart was brought back to life.

He encountered himself against Satana, his sister, who was escaping from Mephisto, because the demon wanted to use her as sacrificial energy in a ritual to control Blackheart, his rogue son. Blackheart started using numerous portals to appear in numerous points of San Francisco at the same time, in order to draw the attention of his father to battle him. With the help of Doctor Strange and Ghost Rider, Hellstrom managed to shut down many of the portals and pin down Blackheart, who Daimon, along with the Alliance, trapped in the demonic realm and secure Earth once more.

In the end, both Hellstroms decided to join the Alliance, Daimon in order to help and prevent any other demonic event, while Satana only wanted protection from Mephisto in exchange of being a powerful ally.[1]

As a ruler of a dimension of Hell, Hellstrom commands vast power in his own dimension. He could sense the presence of the supernatural and could cast spells to transport himself and others into mystical dimensions and back to Earth.

As the Son of Satan, Hellstrom possessed supernatural powers derived from his "Darksoul," a demonic counterpart to his human soul, which physically manifested itself in the pentagram-shaped birthmark on his chest. The Darksoul granted him superhuman strength and the ability to project soulfire. He was able to magically change into his demonic costume at will be extending the middle three fingers of each hand in the shape of a trident, concentrating, and letting his soulfire engulf his body.

Like this? Let us know!
Retrieved from "https://marvel.fandom.com/wiki/Daimon_Hellstrom_(Earth-12131)?oldid=6057533"
Community content is available under CC-BY-SA unless otherwise noted.