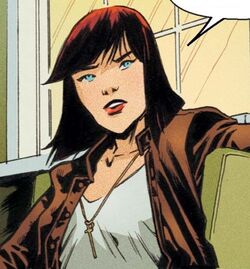 Wow...so is there always this much therapy in your ninja yoga classes?

Dakota North was the daughter of Samuel J. North, a CIA agent.[2] Little is known about her early life, other than at a relatively young age she chose a career as a freelance private investigator.[3]

Her business was apparently quite successful, in that it supported four branch offices across the world. Her earliest recorded case involved being hired by famous fashion designer Luke Jacobson to guard both him and his newest designs.[3] Dakota's brother Ricky North got in the way, but she was able to save Jacobson's life.[4]

Her next case, which she took at the request of her father for his old friend, Major George C. Cooper, required her to guard a deadly sample of an experimental gas.[2] However the gas, stored in a gold pen, ended up in the possession of Dakota's brother, who had been led to Europe by a spy. Dakota followed Ricky to Switzerland where she and her brother were captured by Sheik Ibn Bheik.[5] They managed to escape, however, the gas sample was released, killing the Sheik and all of his men.[6]

Dakota was next hired by a coalition of modeling firms to track down a serial killer dubbed the Slasher, who had been murdering fashion models with a straight razor. This led to Dakota guarding fashion models Elyse Nelson and Mary Jane Watson. On this assignment, Dakota met Spider-Man and the two cracked the case, learning that Ms. Nelson was the Slasher and saving Mary Jane's life.[7]

She was next hired by Jack Power (Mass Master) to clear children's author Jessie Wilcox Jones of theft charges. While investigating, Dakota met the Punisher, who had been contacted by Jack's sister, Katie (Energizer). Working with the other heroes, Jones' innocence was eventually proven.[8] Sometime later, during a day of shopping, Dakota became involved in a battle between the Wasp and Kingsize, an Inhuman shape-shifter.[9]

Her next case led her to Chicago, where she was hired by the Chicago Spectator to gather information on the recently relocated Luke Cage. She ultimately befriended Cage, helping him with a situation involving his father and brother before she returned to New York.[10]

During the time when Malice, the former Dora Milaje once known as Nakia, sought to kill all those dear to the Black Panther, Dakota was hired by the Panther to safeguard Monica Lynne.[11]

Dakota was hired by the law firm Nelson and Murdock as an investigator and bodyguard. She was recommended to Foggy Nelson by her friend Jessica Jones, who previously held the position but had to relinquish it due to her responsibilities as a new mother.[12] She worked with Ben Urich to discover who was running around as Daredevil while Matt Murdock was in prison.[13]

She continued to work with Nelson & Murdock including an investigation into the series of murders committed first by Gladiator and then by Matt's wife, Milla, both of whom had been given a fear-based drug by Mr. Fear. It was during this time that she introduced Murdock to Detective Kurtz, her source in the New York Police Department, who was also investigating Mr. Fear.[14]

Like this? Let us know!
Retrieved from "https://marvel.fandom.com/wiki/Dakota_North_(Earth-616)?oldid=5756233"
Community content is available under CC-BY-SA unless otherwise noted.