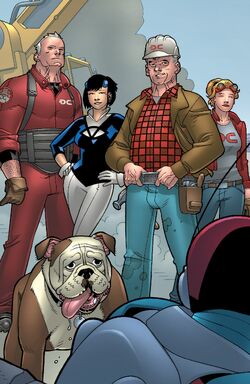 Damage Control is a construction company which specializes in repairing the property damage caused by conflicts between superheroes and super-villains.[1] The company additionally operates as the archival unit for government-contested metahuman machinery and technology that belongs to missing, incapacitated, or deceased individuals where either a clear chain of custody does not exist or the items in question pose an existential threat to the United States.[2]

Damage Control was founded by Anne Marie Hoag and was originally owned by Tony Stark and Wilson Fisk, each owning half the stock of the company, though Stark felt uneasy cooperating with Fisk, a notorious criminal.[3]

Damage Control employees have been in the middle of a breakout at the Vault,[3] confronted Doctor Doom over an unpaid bill,[4] and have been threatened with death by the Punisher.[5] They have met vastly powerful cosmic entities such as the Silver Surfer and Galactus.[6] They have 'fought' side by side with the X-Men,[7] and talked the New Warriors and the Hulk out of fighting each other in the middle of Yankee Stadium.[8]

Following a tragedy at Stamford, Connecticut in which the supervillain Nitro leveled part of the town, including a school, during a fight against the New Warriors, Wolverine hunted down the supervillain. He discovered that Damage Control's CEO Walter Declun had provided Nitro with Mutant Growth Hormone to enhance his powers.[citation needed]

Wolverine's investigation led him to interrogate Anne Marie Hoag. She revealed that Declun and his investors had taken a controlling share of the stock after the company went public to obtain more funds. Following the Stamford disaster, Damage Control obtained the town's reconstruction contract, as well as a contract to perform the evaluation and training of registered super-humans.[citation needed]

In his search for Declun, Wolverine engaged in a fight with Damage Control guards, who were equipped with Mandroid Armor, S.H.I.E.L.D. weaponry, Stark Enterprises technology and other weapons and equipment salvaged from superhuman fights. Wolverine defeated them with the aid of two members of the Atlantean Royal Guard, who had assisted his investigation.[citation needed]

Having survived his confrontation with the Damage Control forces and then escaped from S.H.I.E.L.D. imprisonment, Wolverine confronted Declun, who had just been fired by Hoag, and apparently killed him. However, it later transpired that Wolverine had "only" stabbed Declun's eyes out, which he later had replaced with cybernetic implants.[10]

After Hulk's attack on New York, Damage Control, with Anne Marie Hoag back in charge, was awarded a contract by S.H.I.E.L.D. to clean up New York. With the help of numerous Superhero volunteers, the job went off without a hitch with only a brief issue where the Chrysler Building came to life due to alien rocks.[11]

Sometime after the establishment of the settlement of Krakoa, Mystique, Sabretooth and Toad broke into one of Damage Control's buildings in search of information. Due to this and Sabretooth's attacks on various guards, the Fantastic Four were alerted and confronted the trio, with the Invisible Woman capturing Sabretooth. Through an infographic, it was revealed that various inventions created by both Tony Stark and Reed Richards were now in Damage Control's possession due to events that incapacitated the two of them.[2]

Like this? Let us know!
Retrieved from "https://marvel.fandom.com/wiki/Damage_Control_(Earth-616)?oldid=6438681"
Community content is available under CC-BY-SA unless otherwise noted.