Following the near-destruction of Las Vegas at the hands of Hydra during their short-lived empire, Doctor Strange attempted to revert the damage caused, and used magic to restore the city to its previous state. However, as an unforeseen consequence, a demonic structure called Hotel Inferno emerged from the ground. Strange investigated Hotel Inferno and was taken to Mephisto, who claimed that the entire city had manifested in Hell following its ravaging, and he had adapted it into his realm before Strange pulled back up into Earth.

The tower's influence began to change the citizens of Las Vegas,[3] making them act on their very base instinct and impulse. In turn, for even the lesser of sins, their souls were taken by Mephisto.[4] It also engulfed the heroes present at the scene, namely Falcon, Captain Marvel, Thor, Hawkeye and Black Panther, who were turned into Ghost Riders.[3] Strange agreed to Mephisto's proposal to play a game of brimstone blackjack.[4] If Mephisto lost, he had to go back to Hell and return the human souls in his possession, but if Doctor Strange lost, he would lose his soul to the demon lord.[3]

Strange ended up winning the game by cheating. Unfortunately, Mephisto found out and immediately had Strange captured, tortured,[4] and turned into a Ghost Rider. Even though Wong managed to assemble the team, they were immediately overpowered by infernal threats as soon as they arrived to Las Vegas. Wong and Bats were separated from the rest. While the other heroes were saved from the Ghost Riders by the Scarlet Spider, Wong was confronted by Stephen.[5] Bats managed to temporarily turn the tide of the battle by possessing Stephen's soulless body. After the Midnight Sons caught their second wind, Wong sent Ghost Rider to the top of Hotel Inferno in order to confront Mephisto. Mephisto lifted the curse from Johnny Blaze, so that he could throw him off the building to his death.[2]

While possessing his master's body, Bats and Strange found themselves in a necrotic realm where the souls of all of those under Mephisto's control where trapped. He encountered the souls of the Avengers, and even Dormammu and Shuma-Gorath.[6] Dormammu explained Strange that when he returned Las Vegas, he opened hole in the frabric of dimensional magic. The lords of several of these dimensions ventured into the necro-dimension where the doorway was the most powerful, and battled for access. In the end, Mephisto had emerged victorios, and cast the others down as he crossed over into Earth.[7]

Back on Las Vegas, the Midnight Sons fought the damned Avengers for hours until Mephisto appeared on the scene to gloat about the absurdity of sending Johnny Blaze, a pawn of Hell, against him. In a turn of events, the damned Avengers knock Mephisto down. Wong revealed that when Johnny died and was sent to Hell, he usupred Mephisto's vacant throne and became the new king of his realm.[8] Shortly afterwards, Strange escapes from the necro-realm after tricking Dormammu into helping him open a doorway.[7] Mephisto attempted to return to Hell, but Strange, the Midnight Sons and the damned Avengers held him down. Strange finally defeated Mephisto one-on-one after Blaze granted him from Hell the powers of all of the damned Avengers, but the Hell-Lord escaped. When Mephisto returned to Hell, he was defeated by Blaze an an army of Spirits of Vengeance from across the Multiverse, and was returned to Earth. Hotel Inferno remained in Las Vegas and the city returned to normalcy, with Mephisto being held captive on the top of the casino with countless of magical restraints. The heroes departed, and Wong remained in Hotel Inferno to keep an eye on the casino.[8] 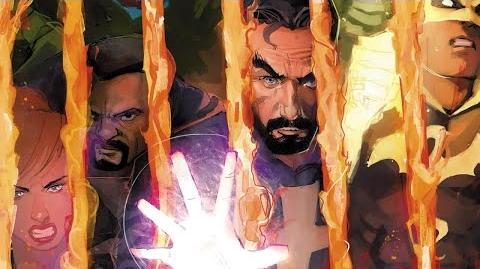 Go behind the scenes of DOCTOR STRANGE DAMNATION