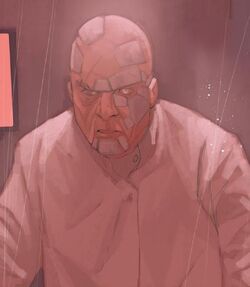 Damon Dran was a wealthy but paranoid businessman who stole a power source developed by the mysterious Project 4 and exposed himself to it, becoming the Indestructible Man. He has clashed with Daredevil[1] and Captain America,[2] among others, but his most persistent foe is the Black Widow.[3]

Dran's indestructibility had "expired" years ago, and he tried to build armor into his body, and used U.V. lights and pills to keep himself immortal, while growing paranoid.[4]

He killed numerous ambassadors through the terrorist Molot Boga, and when he was pinned down by Black Widow, he captured her.[5] Natasha managed to escape and bring Dran to S.H.I.E.L.D. authorities. While he was being held in a facility, he was killed with acid by a rogue agent.[4]

He has skill at strategy and planning.

He has the strength of a man his age, height, and weight who engages in moderate regular exercise.

He had a helicopter, but it was destroyed by Americop.

Like this? Let us know!
Retrieved from "https://marvel.fandom.com/wiki/Damon_Dran_(Earth-616)?oldid=5819281"
Community content is available under CC-BY-SA unless otherwise noted.