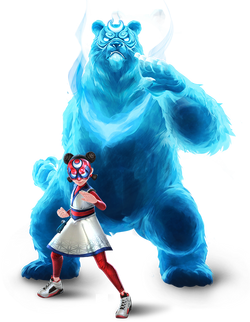 10-year old Dan Bi grew up in Korea, raised by her single father.

Her father was an antique's dealer who was forced to acquire powerful artifacts for the ancient sorceress Morgan Le Fay until one day he suddenly disappeared.

Dan Bi found the mysterious red bear mask in his bedroom but was then attacked by a group of armed soldiers. Dan Bi prayed for protection and this prayer summoned Io - "half-moon" bear spirit - from the mask. Io drove the soldiers out with a roar.

Dan Bi and Io formed a bond, vowing to protect each other from those that may wish to harm them. Together, they set off on a quest to find Dan Bi's father - a quest that will lead them into dark and dangerous shadows of Morgan Le Fay's reach.[1]

Dan Bi is a taekwondo prodigy.

Mysterious Red Bear Mask: It is an enchanted mask that can summon and control Io.

Like this? Let us know!
Retrieved from "https://marvel.fandom.com/wiki/Dan_Bi_(Earth-TRN012)?oldid=6060785"
Community content is available under CC-BY-SA unless otherwise noted.