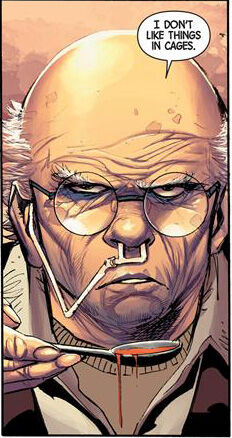 During the Spanish Civil War, American Playboy Dan Kane adopted the masked identity of Captain Terror battling against the fascist forces. With the success of General Franco's side, Captain Terror allowed the fascists to believe he had been killed, and returned to the U.S. In order to protect his identity, Kane pretended to have a weak heart, leaving others to believe that he was incapable of doing excessive work.

When World War II broke out, Dan Kane would take his identity of Captain Terror out of retirement when his friend Admiral Leeds was assigned to stop the Nazi agent Black Claw, who was sinking American vessels in 1941. As Captain Terror, Kane defeated the Black Claw and send his ship sinking into the Atlantic.[1] In early 1942, Captain Terror came to the defense of Professor John Wolf the inventor of a new camouflage paint that could render an aircraft invisible to the naked eye if it was flying at 200 feet. Wolff was captured by the Nazi spy known as Black Carlo, the so called Gypsy Gargoyle, and freed a band of travelling Romany from his control.[2] In his last recorded solo adventure, Kane traveled to the South American country known as Arbolivia to stop Nazi agent Gustave Leech from sinking more American vessels carrying food and other supplies to England.[3] At sometime during the war he worked with Captain America, however that adventure remains unrecorded.[4]

In 1943, the Captain Terror was among a number of heroes who were slain by the Cosmic Cube wielding Red Skull and impaled on a massive wall;[5] however, the Cube was recovered by Private Paul Anselm who resurrected all the slain heroes who aided the combined efforts of the Invaders and the time displaced New Avengers and Mighty Avengers. When the Skull was defeated the heroes used the Cube to wipe out the Captain Terror's memories of the event to preserve history.[6] On April 25, 1945, Captain Terror was among the super-heroes involved in an invasion of Berlin.[7]

Kane moved to a farm, where his son and grand-daugher, Izzy Kane, took care of him. Izzy had returned to the farm in order to take care of Dan, but he didn't like the idea of Izzy giving up on her dreams.

He then saw his grand-daughter fly towards the stars as the new Smasher, and she did not return until a month later, only to learn that Dan was on his death bed. During his last moments, Dan showed Izzy a business card Captain America gave him, where it stated he would do anything Dan needed, which Izzy used to join the Avengers.[8]

Captain Terror is a fine hand-to-hand combatant, as well as a good pilot and sailor.

During the Second World War, Captain Terror had his own fighter plane and patrol boat.

Like this? Let us know!
Retrieved from "https://marvel.fandom.com/wiki/Dan_Kane_(Earth-616)?oldid=6442920"
Community content is available under CC-BY-SA unless otherwise noted.