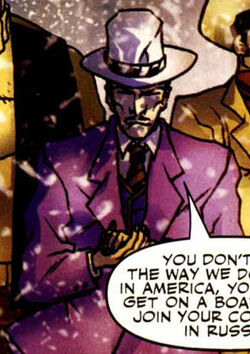 Fancy Dan was a member of the Goblin's Enforcers, who first appeared with Ox and Montana and roughhousing Peter Parker and May Parker in response to the latter's socialist speech. Later, Dan was helping in delivering a African spider god idol to the Goblin's collections. Dan accidentally dropped the idol, spilling and releasing swarms of spiders which swarmed over Dan and killed him.[1]

Seemingly those of the Daniel Brito of Earth-616.

Like this? Let us know!
Retrieved from "https://marvel.fandom.com/wiki/Daniel_Brito_(Earth-90214)?oldid=5725718"
Community content is available under CC-BY-SA unless otherwise noted.