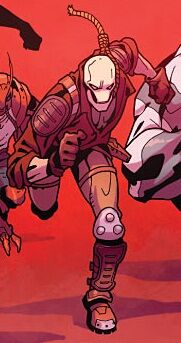 Daniel DuBois is the son of Princess Python, brought up in a high class in New York. While attending school, Daniel met Kate Bishop, and recognized her during a battle between the Young Avengers and the Young Masters.

Daniel's alter ego of the Executioner is a member of the Young Masters of Evil, and he is still in contact with his mother, who funds his activities, but it is unknown how aware she is of this. Later on, Executioner blew up his mother's car after discovering her criminal lifestyle.

Leading the Young Masters in an attack on Latveria, Executioner was captured.

He was later apparently freed, as he was seen among the Masters of Evil.

Executioner doesn't have any superhuman powers, but is skilled with several weapons, including 2 pistols and a sniper.

Like this? Let us know!
Retrieved from "https://marvel.fandom.com/wiki/Daniel_DuBois_(Earth-616)?oldid=6104591"
Community content is available under CC-BY-SA unless otherwise noted.