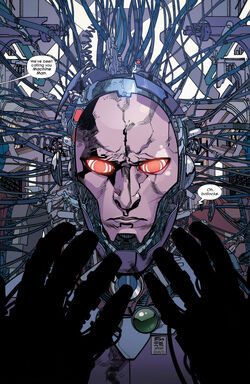 I love this job.

Danny Ketch was a master spy and one of the many newest recruits of Fury's Howling Commandos in order to battle Reed Richards and his Dark Ultimates, who had violently started remolding the world.[1]

The Howling Commandos made their way to the Maker's base, the Aleph-One, where they assisted the Ultimates in the Dark Ultimates' defeat.[2]

During Galactus' invasion, the Howling Commandos found themselves fighting the Gah Lak Tus swarm, which was being controlled by M.O.D.O.K., but numerous of its members were merged into it.[3]

What was left of the Commandos managed to infiltrate into M.O.D.O.K.'s floating city, which was composed of the swarm, the people infected by it and the rests from Reed Richard's City of Tomorrow. Falcon entered the systems, and discovered a new controller was needed to release the victims of the swarm from it, but the new controller had to be merged with the swarm. Ketch decided to become the controller and free the innocents and his teammates from the swarm. The floating city slowly fell apart, and as its former members fell from the sky, Stature and Falcon caught as many as they could. When M.O.D.O.K. tried to escape along with a rest of the swarm, Danny decided to sacrifice himself and explode the city in order to kill M.O.D.O.K..

Danny's consciousness survived after being transferred into the Gah Lak Tus nanites, and was recovered into a robotic body by the mysterious Agent Coulson, who named him "Machine Man".[4] Afterwards, Machine Man joined the Future Foundation.[5]

Like this? Let us know!
Retrieved from "https://marvel.fandom.com/wiki/Daniel_Ketch_(Earth-1610)?oldid=6079197"
Community content is available under CC-BY-SA unless otherwise noted.