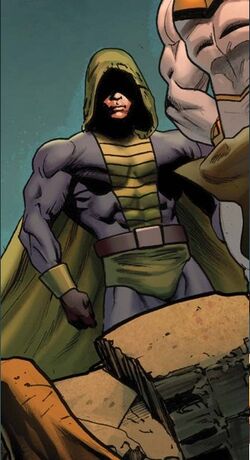 Daniel "Danny" Leighton was born in Austin, Texas. He was later a member of the Savage Crimes, a New York street gang, as a youth. The leader of the gang was a young man called Brock, who later became the costumed assassin Crossbones. Bing was responsible for beating and possibly raping Danny's sister Rachel when she attempted to join the gang.[1]

Leighton later became an assassin known as Cutthroat. He was hired by Amos Jardine to kill the superhero Spider-Man, in place of the eccentric assassin Arcade. Cutthroat battled the mutant hero Nightcrawler, who had discovered the plan, and Spider-Man, and the heroes defeated him with covert assistance from Arcade himself.[2]

Many years later, Cutthroat defeated Mangler and Deathstrike in a fight to the death to become the Red Skull's new chief operative in his Skeleton Crew, replacing Crossbones. He received additional training with Taskmaster to improve his combat skills.[3]

Cutthroat tried to persuade his fellow Skeleton Crew members Blackwing and Jack O'Lantern to help him free their teammate Mother Night from police custody. Cutthroat soon had a brief affair with Mother Night, despite the fact that she was the Red Skull's mistress. With the Skeleton Crew, he battled Crossbones and Diamondback. Danny soon realized that Diamondback was his sister Rachel, and revealed who he was to her.[4]

When Crossbones returned to the Skeleton Crew, Cutthroat feared he would be usurped by him, and planned to kill Crossbones in his sleep. However, worried about the outcome, Mother Night alerted Crossbones to the plan, and so Crossbones was waiting for Danny and slit Cutthroat's throat. Cutthroat was apparently killed.[5]

However, for unknown reasons it transpired that Cutthroat was alive and was an inmate in the super-criminal prison The Raft, where he escaped with a lot of other convicts.[6]

The criminal the Hood has since hired Cutthroat as part of his criminal gang. Cutthroat helped the rest of the gang battle the New Avengers, but he was defeated by Doctor Strange. As part of the Hood's gang, Cutthroat joined the fight against the Skrulls invasion force in New York.[7]

Daniel was seemingly killed by Daken[8] However, he somehow survived, and was among the Camp H.A.M.M.E.R. troops teleported to Asgard in the Oklahoma to fight the Asgardians and the Avengers.[9]

Cutthroat attended a meeting of various villains organized by the Wizard to discuss what to do about Doctor Doom who had unexpectedly decided to become a superhero and become the new Iron Man. As the Hood brought up the idea of forming a gang of villains to take Doom out, Doom suddenly appeared and took down all of the villains present.[10] He later participated in an ambush against Doom along with many of the other villains that Doom had earlier defeated[11] before joining Hood's Gang once more in ransacking Castle Doom in search for Doom's fortune.[12]

Cutthroat is skilled in various forms of unarmed combat, having received training from the Taskmaster. He is also highly skilled in throwing bladed weapons.[13][14][15][16]

Cutthroat possesses the normal human strength of a man of his age, height, and build who engages in intensive regular exercise. [13][14][15][16]

Cutthroat wears a lightweight suit of body armor, and carries a sword and adamantium-edged knives. He carries a gun that fires rockets that explode on contact - on exploding, some of these rockets trigger a "sonic screamer" that induces pain in nearby victims. He also carries a rocket gun that also fires darts, some of which release blinding magnesium flares upon impact.[13][14][15][16]

Like this? Let us know!
Retrieved from "https://marvel.fandom.com/wiki/Daniel_Leighton_(Earth-616)?oldid=6494381"
Community content is available under CC-BY-SA unless otherwise noted.