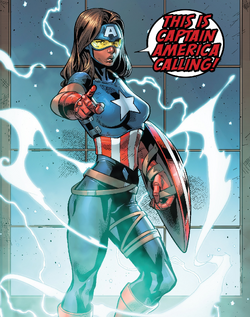 See, my dad was an unbreakable man named Luke Cage. And my mom? Jessica Jones? She was even tougher. And I got their powers. So I don't just throw the shield-- I am the shield!

In the year 20XX, Danielle Cage had become Captain America, having inherited the powers of both of her parents, Luke Cage and Jessica Jones.[1] She was also a member of the A.V.E.N.G.E.R.S. Initiative.[2]

One day during one of Manhattan's periodical floodings, the Golden Skull and his henchmen took advantage of the situation and stole several tanks of helium. Captain America confronted them, and easily took down the Skull's two henchmen. However, before she could knockout the villain, she was mysteriously surrounded and swallowed by a rectangle of energy.

She was transported to a future universe, four hundred years into the future, along with other heroes from other periods of time, a Jim Rhodes early into his career as Iron Man, a Thor Odinson cursed with immortality, the Thor who had temporarily supplanted the original, a Hulk a few months into having become a monster, and a Black Widow and Vision from a period of time during which Danielle was a baby.

They had been summoned by Doctor Doom, who enlisted them to fight the threat of the All-Father Ultron, who had enslaved what remained of humanity. Captain America, Black Widow and Hulk infiltrated the maintenance hub of Ultron's network, in order to take it down, but they ended up being detected.[1] They were distracted fighting Ultron's forces for so long the network hub ended up transferring to a backup. At the same time, two other teams fulfilled their objectives, one destroyed Ultron and another the factory of his sentries.

When all of the heroes returned to Doom's base, Black Widow realized it featured technology similar to Ultron, and then realized his true plan. Doom had already compromised Ultron's network, and the failure of Captain America, Black Widow and Hulk's mission was expected, so with when the network was transferred to its backup, it fell in Doom's control instead . With full control over Ultron's reign, Doom sent his former allies back into their respective times, but the two Thors overpowered it with their Mjolnirs' ability to open portals, and escaped its reach.[3]

The heroes escaped to Asgardia, but Doom's new robotic army caught up with them. With the help of Vision, Captain America took over one of Doom's ship and used it against others. With the arrival of reinforcements for Doom's forces, the heroes only managed to turn the tide of the battle when the Asgardians were freed from imprisonment by Iron Man, but Doom's army remained endless.

Vision convinced the other heroes to teleport to Doom's base, where the synthezoid revealed the true nature of Doctor Doom, that he was actually the Doombot who had been a former Avenger, controled by a prime directive after the original Doom had died. Vision managed to convince Doombot to override the tyranic program controlling him, freeing humanity and ultimately helping humans grow in harmony and peace.

Danielle was returned back to her time, and finished dealing with the Golden Skull. After knocking down the villain, and brought him to her fellow Avengers.[2]

Some time later, Captain America confonted the Golden Skull again, when the villain broke into the ruins of the Latverian Embassy to get his hands on one of the world's last working time machines. When the villain escaped to an alternate timeline set in the past, she followed him,[4] and sought the help of Bobby Da Costa, leader of the U.S.Avengers.[5]

Captain America debriefed the heroes on the Golden Skull and his arrival to this time.[4] While the heroes attended a high-class gala whose attendants, some of the wealthiest businesspeople in the world, Roberto believed were potential targets of the Golden Skull, Captain America remained on alert, later sweeping the area of the hotel where the event was being held, looking for the villain's potential base of operations.

Seemingly those of both Luke Cage and Jessica Jones.

Like this? Let us know!
Retrieved from "https://marvel.fandom.com/wiki/Danielle_Cage_(Earth-15061)?oldid=5765136"
Community content is available under CC-BY-SA unless otherwise noted.