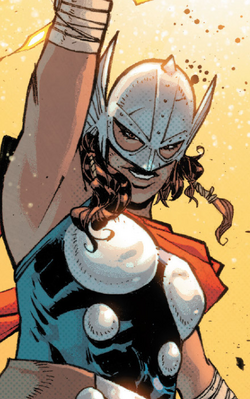 In the Wastelands, Dani raised the Hulk baby Bruce Banner Jr., who Logan had left to her. [1]

When Logan returned to his original timeline, he was abducted by a group of cannibals. Weeks later, he was saved by Dani and an adolescent Bruce Jr. Immediately after his rescue, Dani punched him in the face, mad that Logan had left her alone for seven years. [4]

On the road, Dani explained that people had come looking for Bruce Jr. to shape him into a weapon, which is why they had to keep moving. Logan killing the hulks and Red Skull, followed by his sudden disappearance, left a power vacuum. Some people who desired to be in charge seemed to think that a young hulk would get them to the top of the hierarchy. Others had been trying to kill Bruce Jr. to keep this from happening and for their own safety.

Stopping in an abandoned Kansas City, Logan told Dani the story of his disappearance and his adventures with the X-Men. Dani expressed remorse when finding out that Logan was dying.

After hugging him, she noticed that Bruce Jr, had disappeared from their campsite. Dani and Logan found him at a public library, where he was fighting men from the tranquility temple, cultists who were out to kill the young hulk. Once the cultists released a Hulk-Killer, Logan told Dani and Bruce Jr. to leave the scene while he held the robot back [5]. Logan couldn’t last long against the robot and Dani was soon held at gunpoint while Bruce Jr. had to go up against the Hulk-Killer himself. The young hulk ended up injured badly, though Logan managed to destroy the Hulk-Killer.

After Logan took care of the cultists, he and Dani drove Bruce Jr. to South Dakota for Forge and his wife Elinoire to fix him up. Right as Logan was about to leave for Sacramento, Sabretooth and his gang of his clones drove up to Forge’s compound.[6] While chaos erupted outside the compound, Sabretooth managed to abduct Bruce Jr. so Dani and Logan went after him.[7]

Going after a lead, the two of them broke into a Weapon X facility in Hammer Falls, where they believed Bruce Jr. to be. They found him strapped to a table in a lab, where they were confronted by Sabretooth, his clones, and his boss, Mister Sinister, who commands the clones to take Logan into custody and kill Dani. The two of them managed to run off with Bruce Jr. and steal a car but were quickly stopped by the clones. Dani was shot and fell down right next to Mjolnir, causing it to move. Realizing what this meant, she grabbed it and transformed into Thor.[8] With the power of Thor, she, Logan, and Bruce Jr. overpowered Sabretooth and his clones, though Logan ended up fatally wounded. Dani also killed Mister Sinister.

Dani fulfilled Logan’s last wish and drove him to Sacramento to die where his family was buried. Dani then decided that it was time for her and Bruce Jr. to stop running and find a home.[9]

Avengers of the Wasteland

Dani and Bruce Jr. found a home in Isleton, California, where they worked on a corn farm. There she is reunited with Dwight, who she thought had died at Forge’s compound. He told of her of Doom’s attack on compound, which he and a group of others had been rebuilding after it had been destroyed by Speedball. Dwight asked her to help him kill Doom, which she refused, though it turned out that a Doombot had already followed Dwight to Isleton with a small army in tow. Dani destroyed the robot and, with Dwight and Bruce Jr., defended the farm. After defeating the rest of them, she agreed to help Dwight take down Doom, when suddenly a man dressed as Captain America showed up on the field, offering to lead them to Doom.[10]

On the car ride to Doom, Dani listened to Grant’s story of how he became a super soldier under Doom’s government. When Dwight accused Grant of still working for Doom, Dani shut him down, arguing that they’re all on the same side. On the road they were attacked by Port and his gang, whom they quickly defeated, though Grant acted needlessly violent.

Back in the car, they received a distress call and decided to help out. Arriving at Cedar City, it looked like they missed the fight. In a church tower, they find a broken Viv Vision, who had been sending out the same distress call for weeks. Just as Dwight offered to repair her, Grant pointed out an army of vampires approaching the church, led by Baron Blood. [11] After the team defeated the vampires, they questioned Baron Blood, who revealed that Doom had been out to destroy any city which might be harboring heroes. When he couldn’t give Doom’s location, Grant cut off his head, much to the shock of everyone else.

Once Dwight fixed Viv and Bruce Jr. found that the head of the doombot Dani had destroyed was still receiving signals about Doom’s location, the team went on its way, including Viv. [12] Arriving at Osborn County, the team discovered that they had been lured into a trap. After a battle with a group of villains, Dwight reveals that he was the one who put the locations in the doombot and that he had struck a deal with Doom so he'd spare the people in his village. Though Grant protested, Dani insisted that Dwight only did what he had to to save his people and that they needed to keep going as the people of New Babylon needed their help. [13]

In New Latveria the group joined a Doom rally, where they are found by Doombots. After Bruce Jr. reprogrammed and shut them down, Viv scanned Doom and found that he was dying of cancer. Upon finding out that Doom had not kept his end of the deal and killed the people from Dwight’s village, Dwight was ready to kill Doom himself. Despite Doom’s wish to die in battle, Dani convinced Dwight to not give him what he wanted. Instead, she decided, it became time for them to rebuild. [14]

Like this? Let us know!
Retrieved from "https://marvel.fandom.com/wiki/Danielle_Cage_(Earth-21923)?oldid=6403927"
Community content is available under CC-BY-SA unless otherwise noted.