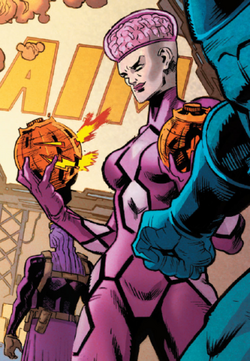 To be fair, I never laid a finger on the money! Not when I have other fingers to do my bidding! Ha ha!

Born in Las Vegas, Nevada, Danielle Forte was selected for her impressive telekinetic abilities to join the Femme Fatales, a group of super-powered, female criminals.[1]

The most notable use of her powers was when Mindblast lifted an airplane that Spider-Man was on, ready to smash it to the ground. Spider-Man dodged her attack, and eventually knocked her out with a piece of the airplane. She went on to serve with the Femme Fatales, also joining Superia's Femizons for a short while.[2]

Mindblast was one of the few mutants left after Decimation and she allied with Hammerhead in his super-villain army.[3]

At some point, Mindblast and fellow Femme Fatale, Bloodlust, were imprisoned in the S.H.I.E.L.D.-run, super-villain prison of Pleasant Hill. When the prisoners staged a takeover, Mindblast and Bloodlust were transformed into copies of Director Maria Hill by the living Cosmic Cube, Kobik, in order to trick the Avengers and Avengers Unity Division into leaving Pleasant Hill. The plan failed, and when the two villains tried to explain themselves, Kobik teleported them away.[4][5]

Mindblast was next seen in Jersey City robbing the Bank of Latveria. Both Star-Lord and Ms. Marvel tried to stop her, but she used her telekinesis to force the two to attack each other. However, an elderly man distracted Mindblast long enough for Star-Lord to shove into her. Ms. Marvel finished her off with a punch.[6]

Mindblast and the Femme Fatales were later joined by Viper and Sapphire Styx in Madripoor to set up the X-Men, Domino, and Psylocke when they traveled to Madripoor to find clues to Wolverine's disappearance. Mindblast mentally disguised herself as Magneto and successfully lured the X-Men and their allies into the trap. She knocked out Storm and fought off Psylocke until she was subdued by Sapphire Styx.[7]

After their success, Mindblast gloated about taking out the X-Men so quickly. Viper ordered Mindblast and Knockout to deposit the captured Storm and Rogue with Magneto. Mindblast toyed with the mentally-controlled Magneto, revealing that Viper had outfitted her with technology that greatly enhanced her powers and unlocked psychic abilities. She used her newfound powers to force Magneto to bend to her will.[8] Later, Viper called for Mindblast's help, but as she and Knockout headed to Viper's location, they were ambushed by Jubilee and Kitty Pryde. Kitty destroyed Mindblast's technological enhancements, freeing Magneto of her control. Magneto burst on the scene and entangled Mindblast with metal, planning to kill her for her actions. Kitty convinced him to leave her as they had to stop a rocket from launching.[9]

After failing to stop the launch, Magneto returned to Mindblast and choked her with metal. Domino and Kitty order Magneto to spare her life, and he reluctantly drops her to the ground.[10]

Mindblast was seen at the Criminal Technology Show Expo alongside several other supervillains. When King Cobra revealed that Iron Man and M.O.D.O.K. were in attendance while disguised as other villains, Mindblast joined in the ensuing brawl.[11]

Like this? Let us know!
Retrieved from "https://marvel.fandom.com/wiki/Danielle_Forte_(Earth-616)?oldid=5888956"
Community content is available under CC-BY-SA unless otherwise noted.