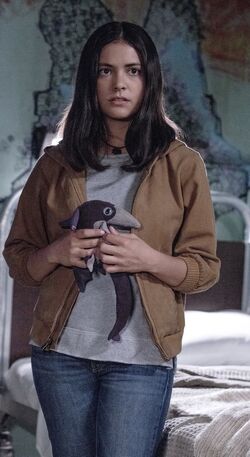 "Dani" Moonstar discovered that she as a mutant when in her sleep she accidentially summoned the Demon Bear from her nightmares, who killed everyone in her village, including Dani's father. Because of this, she ended up in the Milbury Hospital, Dr. Cecilia Reyes relayed to her the news and informed that she should not leave the Hospital until her powers were under control. At the group therapy sessio, Dani met her fellow patients Roberto Da Costa, Sam Guthrie, Illyana Rasputin and Rahne Sinclair, fellow mutants with their own dark past. Illyana showed contempt for Dani and was forced by Dr. Reyes to show Dani the hospital sites. While alone with hrt, Illyana made several misplaced comments against Dani and told her that there was nothing to separate her from freedom, only to taunt her when she collided with the force field domr that covered the place. When an enraged Dani tried to attack Illyana, she teleported away from there. Realizing that she had lost everyone and everything, Dani attempted suicide, but was stopped by Rahne.[1]

The next day, when Dani entered the game room, Illyana immediately began making disparaging remarks against her and forcibly pushed her, trying to get Dani to display her powers. When Dani hit Illyana with her head in the face, Illyana summoned her Soulsword to attack Dani, who was only protected by a force field from Dr. Reyes. Because of this, they were both taken to isolation. At night, when Illyana went with the boys to a place where Dr. Reyes was supposedly unable to keep an eye on them, they ran into Dani and Rahne on the way and Illyana reluctantly agreed to let the two accompany them. Rahne took a liking to Dany, showing her the ventilation shafts she used to move around the facility and taking her out during the night.[1]

As days passed, the patients warmed up to each other and eventually the group came together when Illyana spikes Dr. Reyes' coffee with sleeping pills, allowing them to run amok on the grounds. After a series of accidents involving the patients' fears, Dr. Reyes took Dani for another examination while in fact intending to euthanize her. Dani was only saved by Rahne and the group learned that Reyes had been lying to them and that the Essex Corporation planned on using them as mutant killers. They confronted Reyes, who trapped them inside force fields and began suffocating Dani. Dani instinctively conjured the Demon Bear who killed Reyes and proceeded to hunt her friends while Dani herself remained non-responsive. They carried Dani inside the church and used their powers to hold off Demon Bear's attacks until Dani woke up, got a hold of her powers and drove the Demon Bear away by telling it to leave. As the sun rose, the New Mutants collected their belongings and Sam noticed that the force fields around the Hospital was no longer there. The group decided to head into the nearby town which Reyes had previously told them was twenty miles out. Not knowing whether she was telling the truth, they all decided to head out together; facing the unknown.[1]

Like this? Let us know!
Retrieved from "https://marvel.fandom.com/wiki/Danielle_Moonstar_(Earth-TRN414)?oldid=6108952"
Community content is available under CC-BY-SA unless otherwise noted.