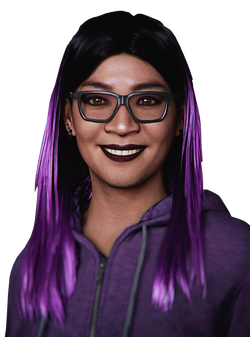 You listen to this podcast because I'm running it. You're not looking for someone more buttoned-up, professional, older, with, like, eighteen million credentials. You want to hear from and talk to me about what's happening in our city. So, I won't be changing how I do things. No trying to class up the pod, no ads, no blazers. It's just me and you. And, y'know what? I think that's perfect.

Danika Hart immigrated to the United States of America, from China, at the age of six. Later, she decided to create the podcast The Danikast. She agreed to debate with the host of Just the Facts, J. Jonah Jameson, in which the latter became emotional and left abruptly. Afterwards, The Danikast became the third highest listened podcast of New York City. She would even later become an ally of Spider-Man, taking down the remnants of The Underground. [1]

Like this? Let us know!
Retrieved from "https://marvel.fandom.com/wiki/Danika_Hart_(Earth-1048)?oldid=6449044"
Community content is available under CC-BY-SA unless otherwise noted.