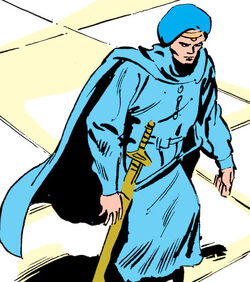 Dante Alighieri was an Italian poet and writer who was best known for the monumental epic poem La commedia, later named La divina commedia (The Divine Comedy). He hailed from the city of Florence during the 14th century.

Dante tale of his journey to the underworld has been given conflicting accounts, the true nature of his adventure cannot be confirmed.

In his tale the Inferno he recounts his journey to actual "Hell" to save his beloved Beatrice from damnation because of him. He fought his way through the Nine Circles of Hell, defeating all manner Demons. In the Second Circle of Hell he encountered King Minos who allow him to travel beyond his realm further into the depths of Hell. He managed to save Beatrice but was confronted by Lucifer himself, whom Dante in his quest has unwittingly freed. However Dante opposes him, and using all the souls he managed to save and redeem against him, he re-imprisons Lucifer, and thus earns his redemption.[1]

Belasco kidnapped Beatrice to give birth to the first of this new race. He took her to the Pangea in the Savage Land, where the Elder Gods directed him to Mount Flavius, where they could be summoned. While on their way, Belasco raped Beatrice and she was nine months pregnant by the time they arrived. When they they were closely pursued by Dante. Belasco took Beatrice into a network of underground passages that were meant to resemble Hell. Dante arrived just in time to witness Beatrice dying in childbirth and he attacked Belasco. During this fight, a pipe was accidentally struck and an unknown liquid escaped, placing Belasco in suspended animation.[2]

Dante's tale the "Inferno" guided the X-Men and Doctor Strange during their own journey through Hell.[1]

Like this? Let us know!
Retrieved from "https://marvel.fandom.com/wiki/Dante_Alighieri_(Earth-616)?oldid=6427160"
Community content is available under CC-BY-SA unless otherwise noted.