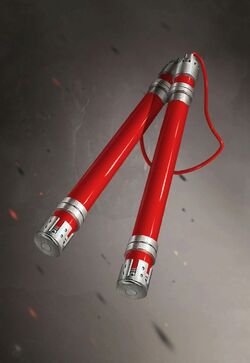 Daredevil has been known to wield a multi-purpose weapon that has many different modes.

In his youth Matt Murdock stole a nightstick from a police officer and hid it in a locker at Fogwell's Gym.[1] Years later he retrieved it and used it to rescue a group of children kidnapped by the Kingpin.[2]

It's initial form is two billy clubs held together by an extendable cable. It can shift from a nunchaku- like weapon to a manrikigusari (a long rope/chain weapon with two weights on its ends), dual billy clubs which can be wielded in an Eskrima-like fashion, staff, or a cable with a grappling hook. The weapon can also be adjusted to combine both sticks into an Eskrima stick. Most notably, the billy club can be disguised as a blind man's cane, for use by DD's alter ego, Matthew Murdock. The weapon is held by a holster on the side of Daredevil's Suit on his left leg.

It appears a police radio was installed into the Billy Club.[3]

Like this? Let us know!
Retrieved from "https://marvel.fandom.com/wiki/Daredevil%27s_Billy_Club?oldid=6430914"
Community content is available under CC-BY-SA unless otherwise noted.