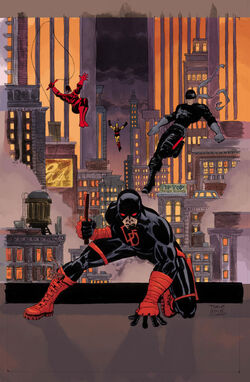 This is the first costume worn by Daredevil. When Matt Murdock returned to New York he found Hell's Kitchen had fallen into a state of decay and disrepair. He met a young girl named Mickey hiding in the remains of Fogwell's Gym and befriended her.

Around this time Wilson Fisk was assuming control of New York's underworld. He engaged in new criminal ventures like prostitution and child pornography. Fisk instructed his men to procure a child and they kidnapped Mickey.

Donning a makeshift costume consisting of a black sweatshirt, sweatpants, a black bandana covering the top half of his face, and a police baton, Matt set out to rescue Mickey and the other children Fisk kidnapped. [2]

Early in his career Daredevil wore a yellow and black body suit with a large red D on the chest.

This suit would later be modified slightly to include two overlapping D's, a design element that was incorporated into the red suit.

Daredevil later retired his yellow and black suit and created his red costume, it has red lenses, the double D symbol is red out-lined with black and the suit itself is all red.

Daredevil donned a heavily armored suit after his red suit was destroyed in battle against the Wild Pack. He would later wear it to fight Hellspawn.

Daredevil wore this suit while possessed by The Beast.[3]

Once he returned to Hell's Kitchen from San Francisco, he returned to wearing a dark grey suit with some red highlights similar to his Shadowland look.[4]

In an alternate future, Sam Fisk had this suit created to atone for his family's sins and honor the legacy of his predecessor. The suit increased his strength, agility, and durability. By Fisk's own admission the suit did most of the moving for him: his muscles suggest a motion, then the suit takes over and follows through. The suit had compartments built into the thighs, which Fisk used to conceal a variation on Daredevil's Billy Club, and two pistols. The suit was equipped with surveillance and targeting systems, which identified targets and threats for Fisk, and even aimed his pistols for him. Small rockets were built into the suit's waist and boots, which allowed Fisk to gain altitude on his jumps. The suit was also bulletproof.[5]

Like this? Let us know!
Retrieved from "https://marvel.fandom.com/wiki/Daredevil%27s_Suit?oldid=6442621"
Community content is available under CC-BY-SA unless otherwise noted.