He is the man without fear.

As a child, straight-A student Matt Murdock runs away from his father upon discovering that his father is a thug for a local mobster. He's splashed by some radioactive biohazard material in an accident, which blinds him. He learns to overcome this disability and developing a kind of 'sixth sense' which allows him to "see" by using sound waves to create a mental image of his surroundings. His father is murdered by the Kingpin, and Murdock vows to avenge him.

Years later, Murdock works as an attorney in Hell's Kitchen, becoming the vigilante known as Daredevil at night. He seeks out and punishes those that he cannot harm in the courtroom. He fights crime in solitude until he meets Elektra. Murdock warms to Elektra, and they become acquainted with each other. After Elektra's father is killed by the Kingpin's assassin, Bullseye, she believes the murderer to be Daredevil, and she seeks him out. Armed with two Sais, she beats him in a fight and realizes who is behind the mask. So she fights with Bullseye instead, who kills her. Daredevil avenges Elektra's death and allegedly kills Bullseye by throwing him through a church window so that he lands on a police cruiser. Daredevil then brings the fight to the Kingpin, severely beating him in his own office. Daredevil spares Kingpin's life, even when he promises that he will be released from prison eventually. During a credit scene, Bullseye is shown in a hospital wing, slowly recovering and still capable of killing (a fly). 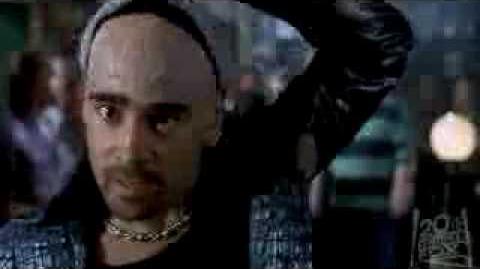 The film was regarded as a modest success at the box office, although it did not make as much money as the X-Men and Spider-Man films. Though the original production was geared towards a darker, more adult film, the success of the then just released Spider-Man prompted Fox to curb the more mature elements and re-envision the film as a summer action vehicle in mid-production.

Fan and critical reactions were mixed at best. Much disapproval was heaped upon Ben Affleck for his performance as Daredevil, whom many fans felt was not right for the role. Besides Ben Affleck, there was mixed fan reaction to the increased budget for CGI effects and retooling of the tone. There was also a small amount of controversy concerning the casting of African American actor Michael Clarke Duncan as the villainous Kingpin, whose traditional comic ethnicity was of Anglo-European descent. Jennifer Garner, who played Elektra, fared slightly better, however, and won her own spin off, Elektra, but it did poorly at the box office. The highest praise went to Colin Farrell, whose portrayal of the maniacal Bullseye was well received by fans and critics alike (an ability he has demonstrated in many movies).

Daredevil's premise departed from what has been established in the long-running comic book series. In the film, Daredevil is a vigilante who has no problems executing criminals who escape justice (although he changes his ways by the end of the film). In the comic series, Daredevil is a principled individual who believes in upholding the rule of law above all else. His principles in the comics have led to conflicts with other superheroes such as Spider-Man, Wolverine, and the Punisher, and, as his alter ego Matt Murdock, sometimes defend the criminals he catches in court.

A glaring error in the film is the nature of the courtroom trial shown at the beginning. Matt Murdock is a defense lawyer working in a private practice. The film depicts him prosecuting an alleged rapist. This would actually be done by a government prosecutor, not a private attorney, unless it was a civil trial, although this would be inconsistent with many other details in the film.

David Fear of MSN Movies ranks Daredevil as the second worst superhero movie to date, behind Batman and Robin.[2] Roger Ebert's review rated it favorably compared to other superhero films.[3]

In December 2004, a director's cut of the film was released on DVD. This version added 30 minutes of footage not seen in the original, including an entire subplot involving Murdock defending a murder suspect played by rapper Coolio, which allows Foggy to uncover evidence of the Kingpin's true identity. It also won quite a few more fans than the initial theatrical release.

The following scenes were deleted that were featured in the PG-13 cut of the film:

The following additions were made:

Daredevil: The Album was released in 2003 by Wind-Up Records for the movie Daredevil, starring Ben Affleck. All songs were previously unreleased, and some songs appeared on later releases. Unlike later Wind-Up soundtrack releases, many songs from Daredevil: The Album notably appeared in the film.

The album was one of the first collaborations between Marvel Comics and Wind-Up Records, which would continue with the releases of Fantastic Four and the Daredevil sequel/spin-off Elektra. Three singles were released from the album: Fuel's "Won't Back Down", The Calling's "For You", and Evanescence's "Bring Me to Life", the first major appearance by Evanescence which would lead to "Bring Me to Life" reaching number one on the Billboard Chart.

Three songs were omitted from release on the album: N.E.R.D.'s "Lapdance", Dara Shindler's "Faraway", and House of Pain's "Top o' the Morning to Ya".

Like this? Let us know!
From Marvel Database, a Wikia wiki.